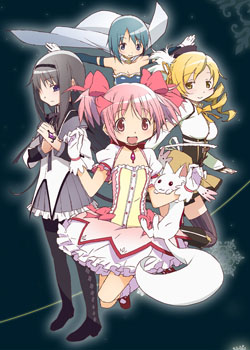 Madoka Kaname is an Ordinary Middle School Student with a working mother, a stay-at-home dad and a close circle of friends. Other than a strange dream about a black-haired girl fighting off a huge monster in a ruined city, her life is a peaceful one. Then, one day, that black-haired girl, Homura Akemi, transfers to their class.

Things begin to change when, after school, Madoka hears someone's voice calling out to her. This voice belongs to Kyubey, a small cat- or ferret-like creature. She and her best friend, Sayaka Miki, then find themselves in a bizarre dream world where they witness an upperclassman, Mami Tomoe, transform into a Magical Girl and save them from otherworldly monsters. Kyubey then asks Madoka and Sayaka to become magical girls, too. The process is very simple - Kyubey will grant them a wish (any wish, no matter how small) and in exchange, they will sign a contract with him, which will allow them to become magical girls...

Too bad things simply are not as they seem to be.

Bringing together an all-star staff, Puella Magi Madoka Magica has Studio Shaft animating, Shaft's primary director Akiyuki Shinbo directing, Yuki Kajiura producing the music, Nitro+'s Gen Urobuchi writing and Ume Aoki designing the characters for Shaft's first original series. The show started airing in January as part of the Winter 2011 season, though it was put on a temporary hiatus due to the Sendai earthquakes in Japan. The final two episodes were broadcast back-to-back on April 21st; the initial announcement was met with much rejoicing. When it was aired on Nico Nico Douga, over one million people watched. Compare this to Lucky Star's similar stream, which had over half a million.

Initially, there were three manga series related to this anime. The first is a direct adaptation of the television series, under the same title. The others are Spin Offs. Puella Magi Kazumi Magica: The Innocent Malice focuses on a different cast of Magical Girls while Puella Magi Oriko Magica features characters from the anime as well as several new characters. For both of these series, it is strongly recommended to watch Puella Magi Madoka Magica first since they reveal critical plot elements from the anime. Some time after the anime ended, an official but noncanon manga anthology series was released.

This series has a wiki which is maintained and updated very efficiently. Therefore, proceed with caution as spoilers abound.

A dub of the series has been confirmed [dead link]. Aniplex USA's teaser page for the series can be found here, now updated with more information about the characters and the series itself. Yen Press has confirmed that they will be publishing the manga adaptation of the series in English. Finally, Crunchyroll and Hulu have begun streaming the series for free.

Namco Bandai is developing a video game for the PSP, Puella Magi Madoka Magica Portable. It is slated to be released in March 2012, and its gameplay is described as a Roguelike RPG. Odds are good that it will avert The Problem with Licensed Games because of heavy involvement of the anime staff—Gen Urobuchi writing the scenario, and visual design by SHAFT and Gekidan InuCurry. An official iPhone game by Mobage featuring four new magical girl characters has also been released.

Plans to make a theatrical film trilogy have been announced. The first two movies will premiere on October 6 and 13. It has been revealed that another Spin-Off manga will be released simultaneously with the two films.

At some point a teaser website appeared playing voice clips from Madoka. It was eventually revealed to be for a Puella Magi online game.

For some of the inspiration of the series, see Faust.

/人◕‿‿◕人\ Anything is possible, if you make a contract with me!

Late Arrival Spoiler Warning: Puella Magi Madoka Magica is one of the most popular anime franchises in the anime fandom as of the Winter 2011 season. It also has a Wham! Line roughly every episode. In other words, there are a great deal of SPOILERS below—most marked, some unmarked, but all of which will ruin your enjoyment of the story. Avoiding these pages is highly suggested for those who have not seen the show.

Tropes used in Puella Magi Madoka Magica include:
Retrieved from "https://allthetropes.org/w/index.php?title=Puella_Magi_Madoka_Magica&oldid=1965620"
Categories:
Cookies help us deliver our services. By using our services, you agree to our use of cookies.