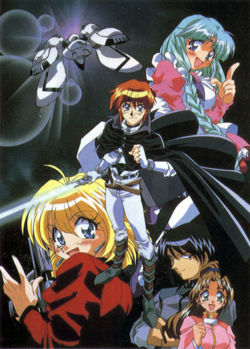 Often considered the sister series to The Slayers, Lost Universe is Hajime Kanzaka's take on the Sci-Fi genre. Following Kane Blueriver, Millie Feria Noturne and Canal Vorfeed, the anime (and novels) explore the trio's job? Trouble Contractors, whom anyone can hire to solve their problems. These problems range from getting a witness to a trial on time (and alive) to tracking down stolen tea sets.

As the series progresses, the Nightmare Syndicate comes to light; this organization is out to conquer the universe, and Kane and Canal seem to have a personal problem with them... Can Millie and Kane unravel the mystery of the Lost Ships and the Syndicate before it's too late?

The series is very much a Kanzaka series; it's 60% humor and 40% Serious Business. It pokes fun at the genre and has various shout outs throughout. The anime's 26-episode run was supposed to have been followed by a 2nd series that would have given it a more conclusive ending, but the funding didn't appear.

There's a widely-held Fanon belief that this series is set in the same universe as Slayers. To pull from the other Wiki:

In Slayers, it was mentioned that the main characters of that series live on a world that is one of the four created by the mother of all creation, called The Lord of Nightmares or simply LoN. This world was known as the Red World. Lost Universe, however, takes place in a different world, known as the Black World. Whereas the demi-gods of the various worlds such as Ruby-Eye Shabranigdo and Dark Star Dugradigdo had physical presence in that world, they appear in the Black World as "Lost Ships," or space ships that have mystical or somewhat magical powers.?

Word of God (as you can read here) has explicitly stated that this is not true; the series are set in two totally different universes. He just liked the names, and reused them. Whether you feel this is an improvement or not varies among the community.

ADV Films licensed and dubbed the show, and it was recently rescued by Nozomi Entertainment along with several other titles. The light novels were never released overseas.

Tropes used in Lost Universe include:
Retrieved from "https://allthetropes.org/w/index.php?title=Lost_Universe&oldid=1720222"
Categories:
Cookies help us deliver our services. By using our services, you agree to our use of cookies.