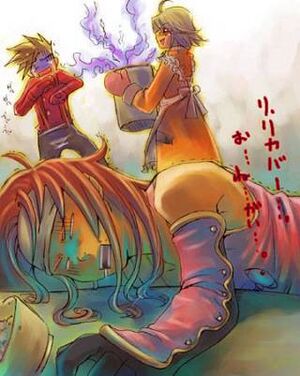 "It's a new recipe! He loved it so much he passed out!"

Her cooking is not just bad, it's inedible, and sometimes actually poisonous. Or it might have bizarre magical side-effects. Or explode. Or it comes to life and either attacks or tries to run away. Animals will stare at it and back away. The character—usually female—may well love to cook, but she's never actually bothered to learn, or she's learned from aliens, or her taste buds are wired wrong, or she just doesn't look to see what she's grabbing when it comes time to throw in another ingredient. The results are often dangerous to the poor chap who has to eat it so as not to hurt her feelings. It seems especially forced when they avoid tasting their own food. Curiously, this is a very popular trope used in anime.

A Lethal Chef sometimes has one or two things she can cook well -- or at least edibly -- but she usually prefers to experiment. Often she is unaware—either through the kindness of friends or determined self-imposed ignorance—that her food is inedible, in which case she is also Giftedly Bad. Occasionally the Lethal Chef can be taught to cook well—usually by a Yamato Nadeshiko type character, generally a sister, the mother or the best friend.

Particularly lively when the cook is trying to win someone Through His Stomach.

This trope is almost always used for comedy, though there are exceptions. Two dishes the Lethal Chef favors are the Fire-Breathing Diner and Oven Logic, with a Gargle Blaster to wash it down. If the chef isn't even using food, I Ate What? can occur.

Since the early 2000s, a milder form of this trope has emerged. Typically, the Less-Than-Lethal Chef cooks food that looks absolutely disgusting—but tastes fine, or even wonderful.

A related trope, Cordon Bleugh Chef, differs in that the chef in question is able to cook perfectly well but likes experimenting with food combinations that more often than not, really should never be combined. A One-Note Cook, on the other hand, is lethal in all aspects except for one (usually very specific) kind of food.

An Evil Chef is a Lethal Chef who does this on purpose, purely so he can laugh maniacally as he watches his victims' stomachs commit suicide. A Chef of Iron is a chef who knows how to serve out lethality with a dose of Martial Arts and Crafts, but knows how to make things other than poisonous cooking too. The Deaf Composer (or in this case "Tasteless Chef") continues to cook despite not being able to smell or taste their food.

Note that in most mundane situations (that is, no crazy ingredients) this can be avoided by the character simply following a written recipe and good quality (not off the street/expired) ingredients.

Contrast Supreme Chef, Feminine Women Can Cook. Can lead to It Tastes Like Feet. Heaven help you if your Team Chef qualifies as this. Not to be confused with Chef of Iron, who is a Supreme Chef that is also Lethal, but through Badass combat skills, not bad cooking (though they can overlap sometimes).

Examples of Lethal Chef include:

Retrieved from "https://allthetropes.org/w/index.php?title=Lethal_Chef&oldid=1949614"
Categories:
Cookies help us deliver our services. By using our services, you agree to our use of cookies.