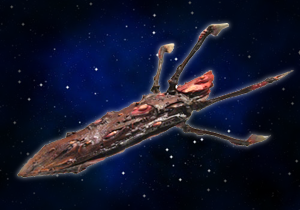 Travel the universe! Meet new life forms! Then eat them!

You know what's cooler than a Cool Ship? A cool organic ship. A ship that lives and grows and heals any space battle damage as you go.

These ships can run the gamut from being completely non-intelligent (generally comparable to plants) to having animal like instincts (the crew often serves more as handlers than as pilots, in this case) or being completely intelligent and self aware. The last type tends to be viewed as female and often has a Spaceship Girl for an avatar.

The exact nature of the ships ranges from being merely Cyborgs, to fully Organic Technology. How organic they actually look varies greatly. These types of ships tend to be grown more often than made in a shipyard. Sometimes they'll even go so far and have the ship be a Space Whale.

The great thing about both the organic/semi-organic living ships is that they're a very easy way to make your series seem ultra science-fictiony by encasing organic bodies in sleek metal shells. If you want to go for something more alien, then you can take the Organic Technology route and have corridors that look like great big arteries.

The idea of a living ship also opens up plenty of story opportunities, simultaneously funny and serious. Imagine a show where the biological ship catches a cold, runs a fever, and keeps sneezing its occupants into space.

Examples of Living Ship include: