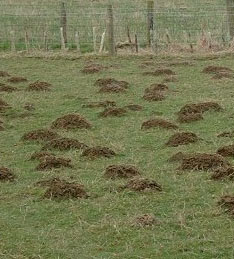 A bad guy who pretends to be a good guy. The audience assumes they are a good guy until the sudden revelation. If well-done, catches the audience out. If especially well-done, it can be the climax of a Wham! Episode.

There will frequently be a showdown with the Mole, who then may return to the series from time to time when the writers want to bump up ratings. Alternatively, if the Mole doesn't know he's been identified, the heroes can feed him false information. Their cover story usually involves a Conveniently Unverifiable Cover Story.

A Mole who happens to be the only person the hero can turn to for expert assistance is the Treacherous Advisor. If the mole is a Sixth Ranger for a Five-Man Band or Power Trio, they're a Sixth Ranger Traitor.

If one of the heros had been in a romantic relationship with the Mole before The Reveal, he or she may ask "Was It All a Lie?". Particularly heartless Moles may reveal that yes, I Was Only Pretending to Like You, while others may have indeed developed feelings for the person being betrayed and may wind up Becoming the Mask.

A really successful example can even become the Mole in Charge.

Unholy Holy Sword is this trope applied to an artifact, weapon, or MacGuffin. Ten Little Murder Victims is an example of a plot concerning the hunt for The Mole. A Wolf in Sheep's Clothing is The Mole via false identity. Flock of Wolves is a group where everyone is The Mole.

If The Mole is also a fake Heel Face Turn, they're a Heel Face Mole. If someone isn't The Mole, but it looks like he is, he's a Red Herring Mole.

Reverse Mole is the reverse, a good guy who's been pretending to be a bad guy. (See also The Infiltration for the short-term version.)

Not to be confused with the Reality TV series of the same name, The Mole from Thunderbirds (which is a digging machine), the Dick Tracy villain, Mole Men, Mole Miner, 6.02 x 1023,[1] or the Mexican chocolate sauce.

Be alert that spoilers may follow, due to the secretive nature of this character.

Examples of The Mole include:

Retrieved from "https://allthetropes.org/w/index.php?title=The_Mole&oldid=1502467"
Categories:
Cookies help us deliver our services. By using our services, you agree to our use of cookies.