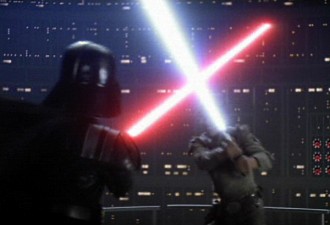 The lightsaber is the coolest weapon ever. Search your feelings. You know it to be true.

The laser blade is a melee Energy Weapon, with a cutting edge made of Pure Energy, giving it Absurd Cutting Power. Generally a type of Impossibly Cool Weapon, they require a lot of Willing Suspension of Disbelief, but are generally awesome enough to be worth it.

Laser blades exist purely because of the Rule of Cool. Glowing is cool, so Power Glows, therefore a weapon that's actually made out of glow must be really powerful. It also allows for a Clean Cut the way a regular sword does not. However, sword fights between two Laser Blade wielders tend to get difficult because Like Cannot Cut Like.

Note that, although the most prolific inspiration is the lightsaber, you'll almost never see the word "lightsaber" outside of that particular Verse, for understandable legal reasons. Thus, such blades are given any variety of slightly less majestic monikers, such as "beam sword", "energy saber", "plasma knife" and, for the paronomasiacs, "laser blade".[1] The energy blade concept tends to be Older Than They Think; the Trope Maker is the "force knife" from the Lucky Starr novels written by Isaac Asimov under the pen-name Paul French in the 1950s.

A subtrope of Absurd Cutting Power, Energy Weapon, and Hard Light. Its Fantasy counterpart is the Flaming Sword, while a less technologically-advanced version is the Hot Blade.

Examples of Laser Blade include:

Retrieved from "https://allthetropes.org/w/index.php?title=Laser_Blade&oldid=1722502"
Categories:
Cookies help us deliver our services. By using our services, you agree to our use of cookies.