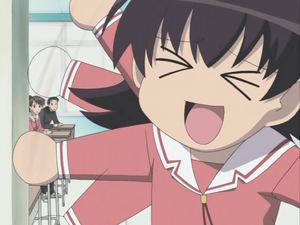 Oh no! Here, already!? I AM SO TOTALLY LATE! HOLY-FREAKING-CRAP!

"Genki" is Japanese for energetic or enthusiastic. The Genki Girl is a character—usually a schoolgirl, but not always—who acts like she's been mainlining Red Bull and crystal meth. She is possessed of an over-abundance of energy, such that she runs everywhere (often with arms waving wildly or outstretched like airplane wings), speaks quickly (sometimes unintelligibly so), and always does everything fast, fast, fast! She's filled with confidence and determination, regardless of whether she's competent or not. Although usually played exclusively for comedy, sometimes the Genki Girl slows down for a serious or introspective moment. But not for long - she lives her life full-throttle. To sum it up, a good way of telling whether a female character is genki or not is to see if her family and peers are exhausted, astonished or even creeped out by her chronic outbursts of vitality. (A female character is by far the more common version, but this trope is not limited to females.)

Despite what you'd think, the Genki Girl is usually not The Ditz. However, there have been a few blends. She is, of course, very often a Motor Mouth or a Nicknamer. If she focuses her powers on getting a boring guy to relish life, she's a Manic Pixie Dream Girl. Less sympathetic portrayals often make her the Jerkass of the group. Alternatively she could be both. Some are even the resident Cloudcuckoolander.

If this is a RPG setting, she's almost always going to be the Fragile Speedster, thus fitting her personality. If she is in a Five-Man Band, she will almost certainly be The Big Guy (and probably an exception to the above if she is).

If a work of fiction gives its characters symbolic flowers that represent their personalities, the Genki Girl will likely get the sunflower while her animal is the cat, though her energy won't necessarily make her go crazy.

Whatever you do, don't give them too much coffee, cola or sugar. And definitely teach them that hard drugs are very, very bad. This is why she may be preferred with somebody who is practical.

Voice actors sometimes become famous for just being able to keep up the role.

Compare Fist of Enthusiasm and Hot-Blooded. Compare The Pollyanna for endless optimism and cheer rather than energy.

Keet is a related but separate trope.

Examples of Genki Girl include:

Retrieved from "https://allthetropes.org/w/index.php?title=Genki_Girl&oldid=1920366"
Categories:
Cookies help us deliver our services. By using our services, you agree to our use of cookies.