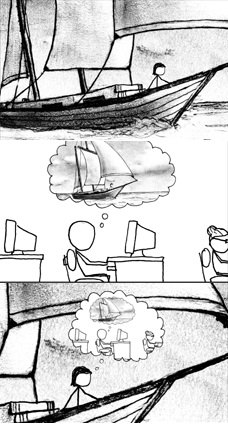 A situation in which Show A is fictional in Show B and Show B is fictional in Show A isn't an example of this trope if they never share a continuity; if in A's continuity B is just fiction and vice versa. This could happen with two completely unrelated works that each incorporate real world elements that happen to include the other work.

This is a relatively common trope used in Crossover Fanfic.

Strictly speaking, this kind of crossover should never logically be allowed to exist. At the very least, the particular episode of each series or work which references the other should be assumed to not exist within the other's universe. Otherwise, you would have a situation wherein it would be distinctly possible for the main characters to see the TV show of their entire reality within said reality, realize their entire existence was a lie, and freak out. And we wouldn't want that, now would we?

One possible justification would be if the two worlds are simply Alternate Universes and the "shows" in question are based on visions people have from the other world. In this case, expect the characters trying to establish what in this shows is correct and what is not. Unfortunately, the Fiction Identity Postulate proves that all fiction is equally unreal. And anyone living in an Alternate Universe may be, by definition, fictional.

This is where Recursive Canon meets Recursive Reality. May create an accidental Intercontinuity Crossover.

See also Celebrity Paradox. Comic Books Are Real is a one-sided version, usually dealing with a Show Within a Show instead of another real-life series. Compare Faeries Don't Believe in Humans, Either, where each side believes the other is only stories prior to meeting, but both have always been fact and that's what the stories are based on. Contrast Stable Time Loop, which leads to a similar Ontological Paradox.

No real life examples, please; at least, not until we have proof that somebody from another universe can interact with somebody from this one.

Examples of Mutually Fictional include:

"What ... is ... this?" he said at last.
"This is a child!" Haigha replied eagerly, coming in front of Alice to introduce her, and spreading out both his hands towards her in an Anglo-Saxon attitude. "We only found it to-day. It's as large as life, and twice as natural!"
"I always thought they were fabulous monsters!" said the Unicorn. "Is it alive?"
"It can talk," said Haigha, solemnly.
The Unicorn looked dreamily at Alice, and said "Talk, child."
Alice could not help her lips curing up into a smile as she began: "Do you know, I always thought Unicorns were fabulous monsters, too! I never saw one alive before!"
"Well, now that we have seen each other," said the Unicorn, " if you'll believe in me, I"ll believe in you. Is that a bargain?"
"Yes, if you like," said Alice.