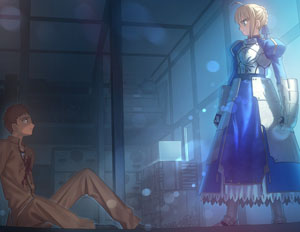 I ask of you: Are you my master?

There exists a plane outside of human concepts, and within there is the Throne of Heroes. Here, the records of the brave men and women whose lives have become legends are kept, to be used as eternal guardians of mankind. The definition of "hero" is broad -- even the ruthless and heartless are the heroes of their own tales.

In Fate/stay night, when a legend is venerated enough by humanity, they can become a Heroic Spirit that surpasses time itself. There is a ritual where seven Spirits can ally with Sorcerer Masters via contract and become Servants. This ritual culminates in a seven-way war to acquire the ultimate prize, the Holy Grail, which can grant the wishes of the Servant and Master who are victorious. As enemies knowing their true name would give opponents an advantage over them, it is hidden. Instead, each heroic Servant Spirit is given a Class by which they are addressed: Saber, Archer, Lancer, Rider, Caster, Berserker, and Assassin. In addition, each Servant is armed with the mysteries that symbolize their legend -- Noble Phantasms, legendary armaments and abilities.

As each Servant falls, the Holy Grail receives their power, until only one remains, and the Grail is ready to grant the winners' wishes. The Holy Grail War that results in this has happened before, with a great cost of human lives, all for that one wish granted by the Grail.

Fate/stay night opens with Shirou, the near-Ordinary High School Student who happens to know a little bit of magic from his late father, a retired mage. Shirou is the sole survivor of a terrible fire that destroyed his hometown -- the site of the last Holy Grail War. He desperately wants to be a hero to overcome his Survivor Guilt, but as the events unfold and he gets sucked into the current Holy Grail War, he learns that Heroes are only heroes when people die. Can he be a hero and still maintain his gentle nature? How holy can this Holy Grail be, if so many die over it?

Then there is Saber, the Servant Spirit who gets bonded to him. Her true name is unknown, but she has the mannerisms of a knight and the appearance of a young woman. Add to this an aloof girl named Tohsaka Rin, a rival Master and schoolmate who finds him too pathetic to kill off immediately. Rin is a professional mage who knows the Grail War rules, but her conscience results in her helping out, despite her protests to the contrary. There is also her mysterious Servant, Archer, who claims to suffer amnesia in the beginning due to his botched summoning. In addition, Shirou has to protect his "family" -- his self-appointed "older sister" teacher Taiga Fujimura, and his kohai Matou Sakura, who has an obvious (to everyone else) crush on him.

Although never released in English, the game has a Fan Translation patch made for it by the good folks at Mirror Moon. The Visual Novel has been adapted for PlayStation 2 and, while replacing the H-scenes that were in the original game with alternate, non-erotic versions, add some content like new CGs and new musiques. The PlayStation 2 version is subtitled Realta Nua and you can implement the extra content from this version on your PC version with this patch.

Tropes associated with the above-listed works should go on their own pages.

Fate/stay night and associated works include:

Retrieved from "https://allthetropes.org/w/index.php?title=Fate_stay_night&oldid=1969480"
Categories:
Cookies help us deliver our services. By using our services, you agree to our use of cookies.