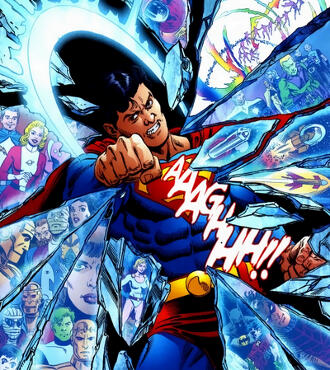 An example of a Retcon caused by forces within the story itself, usually using Time Travel of some sort to alter history.

For example, let's say that the author of a novel series was dissatisfied at the way she'd killed off a character in an earlier book. Instead of just having him show up and explain that he was Only Mostly Dead, she has the other characters pulled back in time by an evil plan of the Big Bad; in the process, they manage to prevent the events that lead to death of the character, and when they get back, ta-da! There he is, good as new.

Whether or not characters will remember the pre-retconned state depends on the story.

Note that this applies only to actual retcons; something like Back to The Future, where changing the past is part of the original thrust of the story, doesn't count.

Examples of Cosmic Retcon include:

Retrieved from "https://allthetropes.org/w/index.php?title=Cosmic_Retcon&oldid=1922678"
Categories:
Cookies help us deliver our services. By using our services, you agree to our use of cookies.