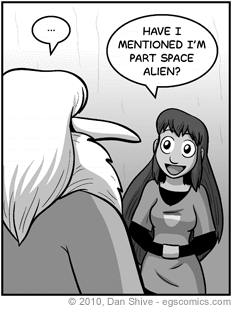 Exposition or Mind Screw? You decide!

El Goonish Shive is an Action Series Adventure Series Dramedy Web Comic, written, drawn, inked and colored by Dan Shive. He has stated that all of the comic can be summed up in one of the main characters' quotes: "Because it sounds like one big awkward moment." Oh, and pay no attention to the art quality of the early strips. It gets better, drastically better.

It's about a cast of characters and their relationships while in the middle of spellcasting, Shapeshifting (Voluntary Shapeshifting and otherwise), gender-bending, and blatantly disregarding the laws of physics. Or, alternately, it's about a cast of characters who occasionally take time off from obsessing over their relationships to cast spells, change shape, and break the laws of physics. The gender-bending is pretty constant, though.

The series has a heavy focus on interpersonal relationships; it's easy to get so wrapped up in the characters' lives that you forget that an inter-dimensional Evil Overlord has possibly been attempting to attack them since his last appearance (seen in a picture) when he sent monsters to kill his dimensional counterparts in one of the first story arcs.

It has its own wiki, Shiveapedia, which contains the definitive timeline of the comic (which is considered Canon by Word of God) plus practically exhaustive arc summaries and character bios.

Retrieved from "https://allthetropes.org/w/index.php?title=El_Goonish_Shive&oldid=1786868"
Categories:
Cookies help us deliver our services. By using our services, you agree to our use of cookies.