Everything About Fiction You Never Wanted to Know.
Jump to navigation Jump to search
/wiki/Robert A. Heinleincreator 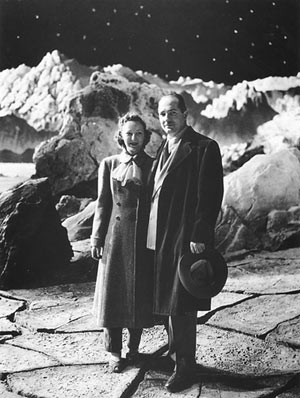 Robert A. Heinlein (1907-1988) is widely considered one of the most influential and iconic writers of Sci Fi and Speculative Fiction of the Twentieth Century. He is counted as one of the "Big Three" of Science Fiction along with Arthur C. Clarke and Isaac Asimov. Often the standard to which other Science Fiction writers are compared, although he caught considerable flak for some of his recurring philosophical and political themes. His works range from space adventure YA novels to political manifestos, and generally score towards the "hard" side of Mohs Scale of Science Fiction Hardness.

Heinlein's most notorious and most dividing novel is Stranger in A Strange Land, an Author Tract which contributed hugely to the rise of the hippie movement. However, he's probably best known with the general public for penning Starship Troopers, which was very, very loosely adapted into a film.

Rare exceptions aside, nearly all of his characters are prodigies and geniuses, to the point where this can be considered his authorial trademark.

Works by Robert A. Heinlein

At Heinlein's insistence, the three Lyle Monroe stories marked with the symbol '§' were never reissued in a Heinlein anthology during his lifetime.

Robert A. Heinlein provides examples of the following tropes:

Heinlein has probably written — and in some cases created — every major form of story in Science Fiction, including:

Heinlein's protagonists are typically geniuses, often with perfect memory and a love for mathematics. They have held opinions covering most of the political spectrum, to the point where the oft-made argument "Heinlein's heroes all have his political opinions!" needs to account for the fact that the sum total of "political opinions held by Heinlein protagonists" includes many mutually contradictory ideas. For that matter, Heinlein himself expounded the merits of wildly different political opinions; several of his earliest books were essentially guided tours through a couple of (non-Marxist) anarcho-socialist future paradises — though said paradises also valued sexual freedom and the right to bear arms. He would later write of a yet another such (alien) paradise in his (in)famous Author Tract Stranger in A Strange Land — and he would reference said paradise throughout much of his future work.

His protagonists can be expected to believe in sexual freedom, the right to bear arms, the death penalty, and private ownership and private enterprise, and to not be shy in expounding on those beliefs. Most believe in hard work and although they often suffer bad luck, in the end it pays off for them. Humans Are Special, a fact often expounded upon by his heroes, who are often, by birthright, training, or sheer openmindedness even "specialer" than regular humans. They also tend to be ridiculously smart. This has lead to some (not always unwarranted) accusations of Sueism in Heinlein's writing. [1] Expect there to be at least one foolish and lazy person to contrast to the heroes. However, smart lazy people are usually respected — see "The Tale of The Man Who Was Too Lazy To Fail" in Time Enough for Love. (Usually, but not always. In The Puppet Masters, the main characters praised engineers but disdained scientists, as the latter merely sit around making up theories without actually building anything.)

Mutual respect and personal autonomy are key themes, and Polyamory is presented as the most rational and reasonable form of partnership. It's also not uncommon for Heinlein's heroes to explore the idea of incest — in any case, family bonds are always very strong. Education (particularly math and linguistics) is a vital (but personal and freely chosen) process, and on occasion there are allusions to naive forms of chaos magic (i.e. mankind's ability to manipulate nature simply by being clever).

In addition to that, throwing rocks at people who don't agree with one's personal beliefs is quite okay when one's personal beliefs are enlightened enough — although Heinlein's heroes tend to bluff rather than use lethal violence. Racism is also always rejected. Heinlein was indirect about it, but many (if not most) of his main characters are implied to be multiracial or at least not white.

His later books valued individual autonomy much more than the earlier ones, and his opinion of government, politics, and politicians changed accordingly. By the end, his opinion appeared to be that there are two types of politician: the Wide-Eyed Idealist who can't be trusted because anyone who can convince him it's for the greater good will get him to abandon a promise, and the Corrupt Politician who can be trusted because he knows he has a reputation to maintain as someone worth buying.

These characters are best seen in The Puppet Masters, which is also his Alien Invasion plot.

His characters are often very intelligent, highly skilled (or they quickly learn any skills needed), good at math, and sometimes without major mental or physical defect. On this last qualification, there are notable exceptions:

Heinlein's most notable protagonist is Lazarus Long, a near-immortal rogue and Anti-Hero. Lazarus Long appears across much of Heinlein's work, often being both the Competent Man and the Wise Old Man. He is a strong proponent of the atheistic, Libertarian, Free-Love Future worldview that became a trademark of Heinlein's work, and is a frequent target of criticism for being a Marty Stu and Author Avatar.

Heinlein's approach to female characterization is sometimes controversial. While his female characters are a reasonably varied lot, they tend to have a few things in common: The men spend a lot of time explaining things to them. They rarely end the story un-paired with a man, sometimes even expressing a fear of lesbianism. And they often see motherhood as their highest goal. Many stories feature underage (barely teen-age) girls "bundling" with far older men. It should be considered, however, that at the time he wrote most of his novels an actively dominant female character was an extreme rarity.

Heinlein's adult years were during the Cold War, and he was extremely hawkish, believing that the Soviets were a serious threat to the US, and that a strong military with lots of nuclear missiles was the only sane response. (For example, one of his character regarded the difference between the Soviets and mind-controlling alien slugs as nearly irrelevant). Though his views were not uncommon at the time, given that the Soviet Union folded shortly after Heinlein's death, understanding his Soviet-phobia can be difficult for modern readers but necessary to understanding his work. (Claiming the genocidal hive-minded Bugs from Starship Troopers are stand-ins for the Soviets is not a stretch).

He also invented and explored the concept of Pantheistic Solipsism in his later works, also known as the "World as Myth" philosophy: where powerful writers create universes via the act of writing. He uses this for multiple Crossovers between world lines, including at least one meeting between every major hero he created in a single scene. It's also noted that later characters would call him (as the author) out for the horrible actions his characters suffer if this idea is true.

His impact can be best seen in Larry Niven's short story The Return of William Proxmire where a fictional version of the infamously Luddite U.S. Senator Proxmire — who wishes to prevent the "waste" of the space program — decides to use time travel to cure Heinlein's pulmonary tuberculosis because every scientist and engineer "fanatic" in the space program credits him as being their inspiration. (For the interested, curing Heinlein means he rises to prominence in the Navy and pays attention in 1940 when Goddard tries to warn the military about the potential and dangers of rockets. When Proxmire returns to the present, Admiral Heinlein's Navy-run program has set up lunar colonies, orbital solar power stations, and prevented the Russians from developing ICBMs).

Retrieved from "https://allthetropes.org/w/index.php?title=Robert_A._Heinlein&oldid=1964150"
Categories:
Cookies help us deliver our services. By using our services, you agree to our use of cookies.