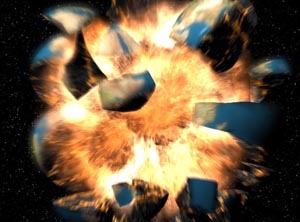 This is what will happen if the heroes don't stop the Big Bad or the Omnicidal Maniac from doing its nasty work. It can be either supernatural or superscience, depending on the villain, but in either case the bad guy must be beaten down and his toys broken in order to save the planet, or the universe, depending on the focus of the story.

Usually it's figurative—expressed as "merely" the death of humankind, the obliteration of Civilization, or its subjugation to aliens, for example—rather than the literal rendering of the planet down to gravel.

This is a common trope in Speculative Fiction, horror and over-the-top espionage shows, as well as many Anime series. It may serve as a prequel to an After the End series, or the culmination of a Just Before the End story. May also include Cozy Catastrophe and/or Scavenger World elements. It's also very common in video games, where it's occasionally unavoidable, sometimes occurring halfway through the game; in other cases, poor play may result in the world coming to a bad end.

If the heroes are slated to succeed in preventing the End, they (and the audience) may be treated to a detailed preview of what's coming.

Inevitably draws the suitably heroic into a Saving the World plot. See Apocalypse How for various types of End Of the World. For when Take Our Word for It simply won't do, Apocalypse Wow is this trope given dramatic form. When asked just why they want to destroy the world as we know it, villains usually say something from the "Why You Should Destroy the Planet Earth" list. That is, if they even have one. May be preceded by Signs of the End Times.

It is a common source of Enemy Mine if another villain wants to Take Over the World, because after The End of the World as We Know It, there's nothing left to take over.

Examples of The End of the World as We Know It include:

I feel fine, though.

Retrieved from "https://allthetropes.org/w/index.php?title=The_End_of_the_World_as_We_Know_It&oldid=1966096"
Categories:
Cookies help us deliver our services. By using our services, you agree to our use of cookies.