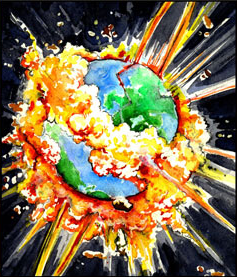 Sometimes, The End of the World as We Know It just isn't enough. If you really want to end the world, why not destroy the whole planet—tear the very ground from under everyone's feet?

Science Fiction writers have devised many methods of demolishing a planet: you can blast it with a laser, you can hit it with a really big object, you can feed it to self-replicating all-consuming Nanomachines, or use other, even more imaginative ways.

This is understandably worse than just conquering a world or wiping out the present civilization. Mankind can always rebuild after that. There's usually no "After" for this End. Destroying a planet is usually reserved for the most "Holy crap" moments in a Sci-Fi or even Fantasy series. Blowing up an entire, inhabited planet is one of the fastest ways to really ratchet up the body count and cross the Moral Event Horizon.

Some series prefer to have this as the final goal of the Big Bad, with the heroes racing to stop him. In other series, there's no way to stop the Earth Shattering Kaboom, and the subsequent storylines focus on the actions of the few survivors as they try to carry on, seek revenge or simply live with the fact that their home has been completely obliterated.

A slightly less devastating variation of this is to simply blast the surface of the planet until the air hums with radioactivity and nothing can live on it, for example, the "glassing" of planets in the Halo verse. This is Colony Drop, Kill Sat, and You Can See the Explosion from Orbit taken to the extreme. Compare the Planet Eater.

The Other Wiki refers to ships and weapons capable of doing this as Planet Killers. Actually shattering a world is in fact considerably harder than TV makes it look. Even if your huge laser manages to blast into the planet, you still have to overcome the gravity of all that rock with some sort of explosion capable of sending all thousands of quintillions of tons far enough away that it won't just clump together again. 'Cause if you've just got a big laser, all you're going to do is drill a button hole in it.

Think of it as a Tokyo Fireball on a planetary scale. The full-on Earth Shattering Kaboom is a Class X on the Apocalypse How scale, often represented with an Earth-Shattering Poster. Oh, and if you're in the right position, You Can See the Explosion from Orbit. Of course, some villains one up this by going Star-Killing.

The villain archetype who wants to cause this is called the Omnicidal Maniac. Alternatively, if he does it by accident (or just doesn't know why he'd do it), he's the Mike Nelson, Destroyer of Worlds.

Oh, and if somehow if some part of planet still remains, and someone settles on that, then it becomes Shattered World. See also Why You Should Destroy the Planet Earth.

Contrast Genesis Effect, where planets are created instead of destroyed.

Examples of Earthshattering Kaboom include:

Retrieved from "https://allthetropes.org/w/index.php?title=Earthshattering_Kaboom&oldid=1947909"
Categories:
Cookies help us deliver our services. By using our services, you agree to our use of cookies.