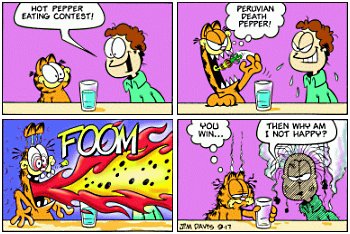 Few victories come without cost, but the cost of a Pyrrhic Victory is ruinous to the victor. A Pyrrhic Victory will often involve a Heroic Sacrifice or people asking Was It Really Worth It?. If it happens at the end of a work, it will inevitably lead to a Bittersweet Ending or even a Downer Ending (and likely Inferred Holocaust). Often the implication of a Lonely at the Top situation, where someone gets everything he wanted, but lost everything and everyone that helped him get there. A clever enemy can use a Defensive Feint Trap to trick an opponent into "winning" such a victory.

These are common in Darker and Edgier series and is one of the defining characteristics of a Crapsack World. Compare to Pound of Flesh Twist. Contrast with Pyrrhic Villainy and Shoot the Shaggy Dog. If the bad outcome of a victory is due to post-victory arrangements rather than victory itself, you may look for Won the War, Lost the Peace. When dealing with Eldritch Abominations, this overlaps with Broke Your Arm Punching Out Cthulhu. Contrast Xanatos Gambit, where "losing" might benefit the planner more than outright victory.

Has nothing at all to do with the victories of Pyrrha Nikos from RWBY.

Examples of Pyrrhic Victories include:

And if this wasn't bad enough, season seven opens with Castiel smiting numerous angels who opposed him and humans who offended him, and losing control of this power so it releases voracious, unkillable monsters from Purgatory on the world.

Three years later, just when his people's lives and his own mental state have stabilized, his attempt to rescue the rest of the world goes as wrong as it possibly can, and he is forced to watch everyone he ever loved sacrifice themselves for him as his country is ravaged by invaders, ending in his own death. Thank God for that gaiden where you can fix this.

Retrieved from "https://allthetropes.org/w/index.php?title=Pyrrhic_Victory&oldid=1970374"
Categories:
Cookies help us deliver our services. By using our services, you agree to our use of cookies.