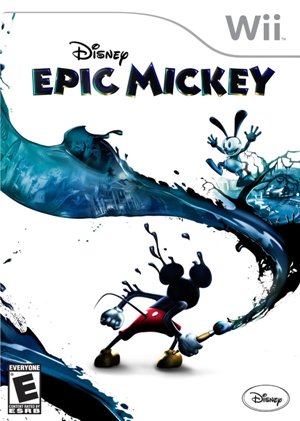 The choice: Mascot, or Miscreant?

"I love the nostalgic, myself. I hope we never lose some of the things of the past."

Epic Mickey is a Disney game for the Wii developed by Junction Point, spearheaded by Warren Spector of Deus Ex and System Shock fame. In an ambitious effort to help Disney restore Mickey Mouse's iconic status, it brings back the happy memories of Disney's classic short subjects and feature length films from their Golden Age, Silent Age, Dark Age and Renaissance Age as well as attractions from the Disney Theme Parks of old...

...But NOT in the way anybody expected.

The story begins with Walt Disney's original cartoon star Oswald the Lucky Rabbit after finally getting Walt some success and recognition, being taken from him over a budget dispute, fading into obscurity, and being replaced by his younger half-brother Mickey Mouse. Fortunately, he becomes the first resident of a world created by the wizard Yen Sid for forgotten and rejected Disney creations and ideas. This world, called Wasteland (based on the Disney Theme Parks), exists as a small model on a table within Yen Sid's tower. Oswald takes this world as his own, presenting himself as a king there. Soon after, Oswald teams up with The Mad Doctor, another early resident of Wasteland—together, they create the robotic Beetleworx, which serve as construction tools for Wasteland, as well as relocators for new residents of the world, and together they try to make Wasteland a comfortable home for the other lost Disney characters who later join them... but Oswald grows resentful of his younger brother over time due to his increasing popularity. In a vain effort to emulate the life he never had, he makes a very large family with his feline girlfriend Ortensia, and has The Mad Doctor build robotic copies of Donald Duck and Goofy to help him recreate the adventures Mickey went on... but even this fails to fill the void.

Later on, Mickey himself stumbles into Yen Sid's tower, after being lured in by the wizard's mischevious (or malicious) magic mirror. Shortly after arriving, he sees Yen Sid put the finishing touches on Wasteland. Content with his progress, Yen Sid goes off to sleep, while Mickey decides to put his own touch on Wasteland: he spots the magic paintbrush Yen Sid was using and begins to fiddle with it, but accidentally creates a monster called the Shadow Blot and spills paint and paint thinner all over the model. Hearing Yen Sid approaching, Mickey tries to erase the Blot and quickly clean up... and ends up spilling even more thinner on the model, creating a gaping hole in it, and then flees back to his bedroom via the mirror before the wizard returns. Despite Mickey's attempt to hide his transgression, the not-so-dead Blot persists and enters Wasteland via the hole: there, it takes over Wasteland, twisting it into a sinister and dangerous version of the original, and drives Oswald and any resistance into hiding during the conflict, henceforth called "The Blot Wars". The Doctor promptly stabs Oswald in the back (as he had always wanted to) and sides with the Blot, if just to further his own agenda.

Decades later, having long forgotten the incident, Mickey is suddenly pulled into Wasteland from his home via the Blot. Mickey manages to grab the magic paintbrush before he is pulled in, so he can create and erase things with paint and thinner. After narrowly escaping from Dark Beauty Castle and the Doctor and Blot's attempt to remove his heart, as well as having a brief encounter with Oswald, Mickey's initial goal is to simply return home, but his discovery of the miserable state of Wasteland and its inhabitants, including old friends like Horace Horsecollar, cause him to change his plans.

Now the mouse must regain the trust of his resentful older half-brother Oswald, foil the Mad Doctor, and stop the Shadow Blot to save and restore Wasteland, all while trying to keep his heart, the symbol of those who remember and love him, which is all the Blot needs to escape into the real world.

So, if you haven't guessed already, this is the other series that turns our hero into a complete Badass. It's also being adapted into a couple of kids' books and a prequel Web Comic and graphic novel written by Peter David.

A sequel Epic Mickey 2: The Power of Two (selected from a batch of subtitles that also included Return of the Mad Doctor and Mystery on Mean Street) was released on multiple consoles in 2012 and features co-op play, with a second player controlling Oswald, who flies like a helicopter and attacks with electricity. The game is also a musical, with Mickey's moral choices affecting the tunes, and among the new areas open in Wasteland is Frontierland. Marv Wolfman (Teen Titans) co-wrote the script.

There is also a companion game for the Nintendo 3DS subtitled Power of Illusion, developed by DreamRift, the folks behind Henry Hatsworth and Monster Tale. Officially a followup to the Castle of Illusion series as well, the story has Mizrabel and the castle itself trapped in Wasteland. Seeking a way out, she tries draining the paint and cartoon essence out of famous toon residents of Mickey's world. Mickey must save his fellow toons and confront Mizrabel, repairing the damage with paint along the way.

Take note: it seems how much one will enjoy this game is extremely reliant on taste. Its pacing and design is heavily akin to Nintendo 64 platformers like Banjo-Kazooie, except modernized. Some will find the whole game brilliant, others will find it sub-par. The only real consensus is that the camera can be rather wonky (and perhaps a bit "Goofy"), but even then, some will find it less of a bother than others.

Tropes used in Epic Mickey include:

"I'd say good luck, but "heroes" don't need luck, right?"
"Yes sir. Spatters better watch out for you. You like that Thinner."
"That was an impressive display of destructive firepower."

Gus: "Personally, I give them a few months, tops."

Gus: "It's true what they say about you, you can make friends with anybody."

Gus: "Hey! Our land is barren enough without your help!"

Oswald: I should have known! You stole my life AND ruined my home! That's it! You and me, Mouse! Right now, c'mon! I've been waiting for this for years! This is gonna be my moment! *cue Oswald's fury accidentally breaking the seal on the REAL Shadow Blot*