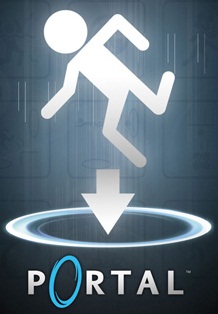 Now you're thinking with Portals.

The most fitting description you can have for Portal is "first-person puzzle game." Essentially, it is a Puzzle Game made in 3D with a First-Person Shooter engine, which can serve as a somewhat misleading combination.

The player character is Chell, who wakes up in a seemingly uninhabited facility. GLaDOS, the facility's AI robot voice, sends her through a series of puzzles as a test subject for the Aperture Science Handheld Portal Device, which is capable of opening portals on flat surfaces (only two at a time), creating a link between them. The tests are deadly and require quite a bit of creativity for Chell to get through, navigating the bizarre twists of geometry and gravity that are exploited for all they're worth.

There are no other characters to interact with, no enemies to kill (except for gun-turrets), and no items to find (other than the portal gun itself, which is given to the player right away and upgraded shortly after). The challenge comes from progressing through the test chambers, as it becomes increasingly clear that GLaDOS might not be all there and displays an alarmingly cavalier attitude to your safety and sanity. But hey, you're promised cake.

Released as part of The Orange Box in October 2007. It was patched in March 2010 with an updated ending through Steam, a rarity for such an old single-player game.

Portal appears to have revitalized a somewhat stagnant industry; instead of being a confusing 'me-too' clone of the big sellers, the game was relatively short, used easily-understood mechanics, and featured a premise that was clearly spelled out, easy to grasp, continually challenging as new puzzles were introduced and didn't bog the gameplay down.

The sequel, Portal 2, was released April 2011. Chell is awakened an uncertain but very long time after the events of Portal by an AI core named Wheatley, and in an attempt to leave the facility, they accidentally awaken GLaDOS. Now, please enter your local Aperture Science Enrichment Center for further testing.

0tal here. Wha? Who put that there?

If you are looking for portal-related tropes, see Teleportation Tropes.

Retrieved from "https://allthetropes.org/w/index.php?title=Portal_(series)&oldid=1949044"
Categories:
Cookies help us deliver our services. By using our services, you agree to our use of cookies.