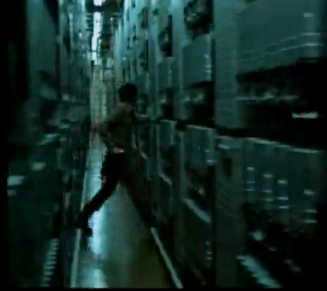 May or may not require actual racing.

A horror and police procedural trope where the police set up a phone trace to catch a criminal but they need them to stay on the line for a certain amount of time. The amount of time will vary, yet somehow the criminal will know the exact amount of time and purposely hang up just before the police can get a trace. If it's a particularly high-tech setup, expect to see a computer generated map showing the tracing process.

Even if the person on the other line is encouraged to keep the other person talking, it never seems to work. The criminal will say everything they want and still always hang up a few seconds shy of the minimum time to trace the number. In some cases, the criminal will say they're aware of the phone trace or say how many seconds the call took. This trope is often used by serial killers or any particularly clever character. A common subversion is to stay on the line just long enough for a trace, but the purpose is to lead the police somewhere else as part of the criminal's elaborate plan.

An essential part of The Calls Are Coming From Inside the House.

As technology marches on, this trope has morphed into tracing the computer connection, but the essence remains the same. Is often a source of Did Not Do the Research, since (unless the work is set in the 1960s or earlier) the phone company can use their computer records (at least supposedly) to tell the cops what numbers called a given phone, and when, even months after the call. Conversely, the relentless march of science has brought new problems – such as Caller ID spoofing, disposable "burner" handsets and widespread abuse of Voice over IP – which may well mean that the information is falsified in some manner or the call routed through multiple layers to misrepresent its origins.

Examples of Phone Trace Race include: