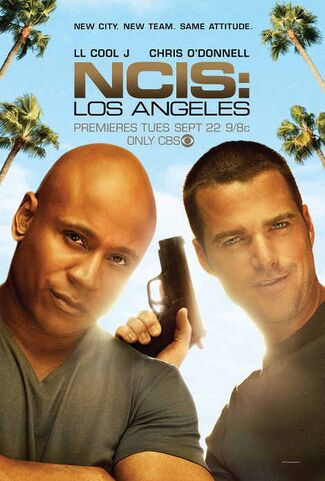 Formerly known as NCIS: Legend, NCIS: Los Angeles is a spin-off from NCIS. It takes place in L.A. and concerns the Office of Special Projects, a division that conducts undercover operations for cases within the purview of NCIS. As a result, this spin-off series has a heavier Spy-Thriller atmosphere as opposed to the Procedural feel of the parent series.

This spin-off began on September 22, 2009 in the timeslot following NCIS. It stars Chris O'Donnell, LL Cool J, Daniela Ruah, Adam Jamal Craig, and Linda Hunt. Rocky Carroll has a recurring role as his character from the original series. Most of the main cast were first introduced on a two-parter called Legend on the original NCIS.

The LA team is headed up by Henrietta "Hetty" Lange, a diminutive woman with a penchant for fashion and more connections than most people could dream up. G. Callen (O'Donnell) and Sam Hanna are both field agents and best friends. Hanna is an ex-Navy Seal while Callen carries some emotional baggage over his childhood spent in foster care and not actually knowing what the "G" in his name stands for. Rounding out the team are junior field agents Kensi Blye and Dom Vail, who haven't seen quite the same Character Development as the leads, but just give it time. The LA branch also boasts its own tech wizard in Eric Beale. A new role for the franchise is that of an operational psychologist, Dr. Nate Getz, whose job it is to evaluate the team's mental stability.

The show is now in its third season, with new characters Nell Jones (tech wizard) and Marty Deeks (LAPD liason/field agent) becoming members of the team in season two, ( after Dom was killed off and Nate took an extended assignment overseas).

Tropes used in NCIS: Los Angeles include:
Retrieved from "https://allthetropes.org/w/index.php?title=NCIS:_Los_Angeles&oldid=1831861"
Categories:
Cookies help us deliver our services. By using our services, you agree to our use of cookies.