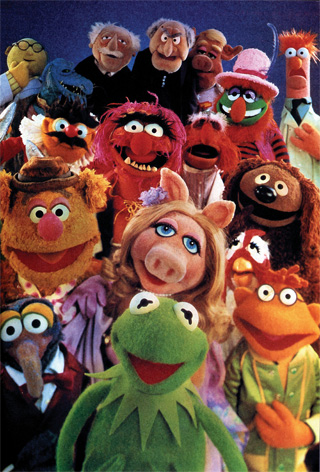 The immense popularity of The Muppets they created for Sesame Street gave Jim Henson, Jerry Juhl and Frank Oz the impetus to create a variety show for family viewing, but with social and political satire. ABC aired a pair of Pilot specials, The Muppets Valentine Show (1974) and The Muppet Show: Sex and Violence (1975), but when all the U.S. networks rejected their (frankly awesome) pitch for a weekly series, they instead finagled a distribution deal with Britain's ITC, under the auspices of Lord Lew Grade.

The Muppet Show was produced for worldwide weekly syndication from 1976 to 1981. It was videotaped at the London studios of ITC's parent company ATV. The choreography for the human guests was created by Gillian Lynne, who later went on to design all of the ballet sequences in Andrew Lloyd Webber's stage version of The Phantom of the Opera.

The show became so popular that in at least one U.S. market, two stations broadcast different episodes of The Muppet Show in back-to-back time slots! The show was never actually cancelled; instead, Henson and company decided to end it so that they could work on films, The Muppet Movie in particular.

Cheerful, cool-headed Kermit the Frog was the emcee-slash-production manager-slash-eye of the storm for this truly 'far out' all-puppet Variety Show. The setting was a tiny rundown downtown theatre and the tone was deliberately reminiscent of old-style vaudeville, where anything could happen and usually did. Other major members of the troupe included diva Miss Piggy, comedian Fozzie Bear, piano-playing Rowlf the Dog, daredevil performance artist Gonzo the Great, and Scooter the eager "go-fer".

A different human entertainer was featured as the show's guest performer in each episode, and the show's cachet quickly became such that they were frequently A-list--often uniquely so (ballet legend Rudolf Nureyev, anyone?). Each week, technical flubs, talent crises, rampaging egos and financial issues (when the pigs weren't rebelling, or angry clones weren't on the loose, or the Star Wars cast wasn't rampaging through in search of Chewbacca) would bring the show teetering to the brink of disaster; each week, the show somehow managed to go on.

Recurring sketches included Veterinarian's Hospital, starring Rowlf ("the continuing stoooooooory of a quack who's gone to the dogs"); Pigs in Space (yep, pretty much); Muppet Labs, with Dr. Bunsen Honeydew and his perpetually terrified assistant Beaker ("Now your family can be protected from the heartbreak of gorilla invasion!"); cooking segments with the game-but-goofy Swedish Chef; and the disaster-prone 'Muppet News Flash'. Piano-playing Doctor Teeth and his Electric Mayhem -- laid-back bassist and singer Floyd Pepper, groovy guitarist Janice, silent saxophonist Zoot and drummer Animal -- were the house band. And sitting high above it all in the balcony, in prime position to volley insults, were codger hecklers Statler and Waldorf:

Ostensibly a family show, The Muppet Show in practice played freely with the dark side of Henson's vision, more familiar from his later work. Notable guest stars included Alice Cooper, Vincent Price, Jonathan Winters, Peter Sellers, Christopher Reeve and Steve Martin. Songs from adult shows like Chicago and Cabaret were worked into the mix (to say nothing of Elton John singing "Goodbye Yellow Brick Road", or Cooper's "Welcome to My Nightmare"...) Casual violence abounded, seemingly gentle skits often took a weirdly surreal turn. Typically, in the Robin Hood episode, lovely Lynn "Maid Marian" Redgrave tricks Gonzo as the Sheriff into stretching out on his own torture rack -- and he appears to enjoy the experience.

And it's likely that few viewers knew of the ultimate origin of "Mah Na Mah Na" , the song used in the iconic sketch of the same name -- the soundtrack of a 1968 Italian soft-core Mondo documentary, Svezia, Inferno e Paradiso (Sweden, Heaven and Hell), where it was used as background music for a sauna scene that is remarkably tame by today's standards. Here's the track itself. (Henson also did an earlier version back in Sesame Street's younger days).

The concept was brought back and updated in 1989, with the "Muppet Television" segments of The Jim Henson Hour, which moved the show from a theatre to a TV station. A second short-lived revival in 1996, Muppets Tonight, used a similar setting, this time a single studio instead of an entire network.

Currently revived in the form of a Comic Book Adaptation, The Muppet Show Comic Book, and a Youtube channel.

See The Muppets for various other Muppet productions, and Muppet Cameo when they show up in other shows.

Tropes used in The Muppet Show include:
Retrieved from "https://allthetropes.org/w/index.php?title=The_Muppet_Show&oldid=1818942"
Categories:
Cookies help us deliver our services. By using our services, you agree to our use of cookies.