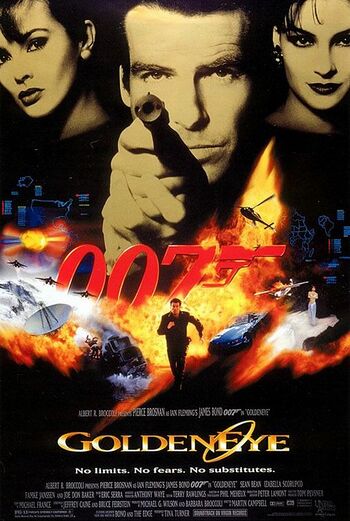 The first James Bond film after a six-year hiatus following Licence to Kill, the first done after the end of the Cold War and the first to star Pierce Brosnan. For many younger people, this was the first James Bond film they've seen in a theater. His Bond Girls included heroine and computer programmer Natalya Simonova (Izabella Scorupco) and villainous assassin Xenia Onatopp (Famke Janssen).

In this film, someone steals the control disc for a pair of satellites that go boom. Bond is sent to St. Petersburg to investigate and has to fight a former comrade who was Left for Dead after a mission to infiltrate and destroy a Soviet military facility went wrong. Particularly memorable for the chase scene where Bond goes after one of the bad guys in a tank.

A quick note on the origin of the name. It's named after Fleming's house in Jamaica, Goldeneye, which is in turn named after Ian Fleming's (who was at the time in British Naval Intelligence) plan for maintaining control of Gibraltar in the event that fascist Spain entered World War II on the side of Nazi Germany.

Bonus confusion: the fiction film GoldenEye should not be confused with the documentary film Golden Eye, which is about the aforementioned house in Jamaica. Especially not if you're a British newspaper giving away the latter on DVD bundled with the paper itself, and supporting said offer with a TV advertising campaign, Daily Mail. It tends to get you shouted at by the advertising regulator.

Tropes used in GoldenEye include:
Retrieved from "https://allthetropes.org/w/index.php?title=GoldenEye_(film)&oldid=1792839"
Categories:
Cookies help us deliver our services. By using our services, you agree to our use of cookies.