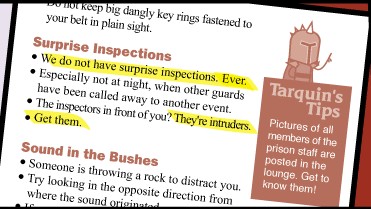 The solution to poor guards? Giving them a proper instruction manual.

Some villains don't play by the rules. A point comes when a typical Genre Blind villain would make the tiny, critical but common mistake that would lead to their defeat like every other villain before them in an identical situation. You've Seen It a Million Times before.

But this time, the villain has an attack of Real Life common sense and uses their genre savviness to their advantage. No need to waste your breath asking Why Don't Ya Just Shoot Him—they do!

In short, a villain that's read (or even written) a rule or two on the Evil Overlord List, and will usually bring attention to this very fact. Though they don't always overlap, being Dangerously Genre Savvy does help on the road to being a Magnificent Bastard.

Compare Flaw Exploitation, and Fake Weakness. May lead to Defied Trope and (from there?) Reality Ensues.

Examples of Dangerously Genre Savvy include:

Retrieved from "https://allthetropes.org/w/index.php?title=Dangerously_Genre_Savvy&oldid=1966764"
Categories:
Cookies help us deliver our services. By using our services, you agree to our use of cookies.