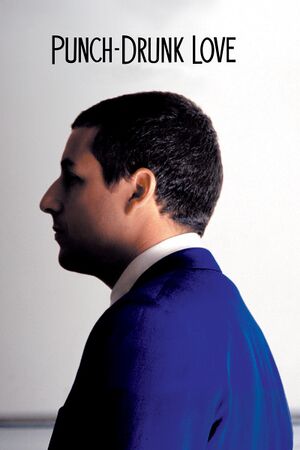 Punch-Drunk Love (2002) tells the story of Barry Egan (Adam Sandler), an introverted, sweet but socially inept Man Child, whose life revolves around his novelty plunger business (Fun-gers) and attempts to extricate himself from the domineering influence of his seven sisters. His interests mainly include buying up large quantities of pudding to take advantage of their air miles offer, and using phone sex lines to alleviate his loneliness.

Then one day, Lena Leonard (Emily Watson) walks into his life, and everything changes.

Punch-Drunk Love is notable as one of P.T. Anderson's low-key works, made between the epics Magnolia and There Will Be Blood, and for showcasing the dramatic chops of Adam Sandler while simultaneously being a warped Post Modern take on the Romantic Comedy and Adam Sandler movies in general.

Tropes used in Punch-Drunk Love include:
Retrieved from "https://allthetropes.org/w/index.php?title=Punch-Drunk_Love&oldid=1830754"
Categories:
Cookies help us deliver our services. By using our services, you agree to our use of cookies.