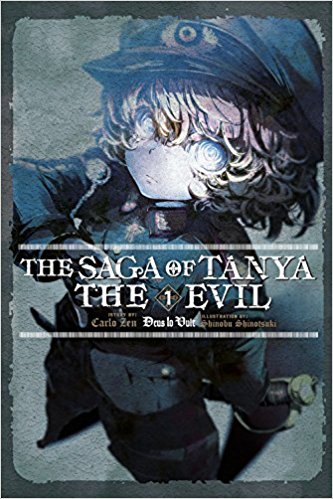 Saga of Tanya the Evil began as a web novel and now has light novel, manga, and anime adaptations (although some adaptations are probably based on other adaptations instead of the web novel). In Japan it's called “Yōjo Senki”, which translates to "The Military Chronicles of a Little Girl". The light novel is written by Carlo Zen and illustrated by Shinobu Shinotsuki. The anime is dubbed by FUNimation. Subtitled is available on Crunchyroll.

God is annoyed an atheist japanese salary man refuses to admit “Being X's” divinity[1]. So, how do you make an atheist faithful? With a (proverbial) fox hole!... in a world with magic, going through it's first World War. A world war, by the way that has many obvious similarities with our first World War. Also as a little girl.

Tropes used in Saga of Tanya the Evil include:
They took that quote as not only a confirmation that the enemy (well, the UK is technically "neutral" with the Empire, but they UK and the Empire aren't on good terms) knew what they were up to, but left that message to taunt them if the UK managed to hack into the operation orb.
Retrieved from "https://allthetropes.org/w/index.php?title=Saga_of_Tanya_the_Evil&oldid=1961820"
Categories:
Cookies help us deliver our services. By using our services, you agree to our use of cookies.