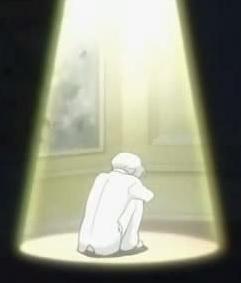 I think we broke him.

When things look depressing for our comical Anime hero, what's the best course of action? Why, go Super-Deformed, sit in a corner, wrap your arms around your knees, and sulk like you've never sulked before! Preferably in a Dramatic Spotlight. Bonus points if you manage to act gloomy enough to attract Ghost Lights or grow mushrooms in your dark, damp corner of woe. Often combined with Color Failure. The technical term for this is latibulating.

Contrasts with Berserk Button, where the comment or action results in the character reacting in a more violent manner.

Examples of Corner of Woe include:

Retrieved from "https://allthetropes.org/w/index.php?title=Corner_of_Woe&oldid=1824354"
Categories:
Cookies help us deliver our services. By using our services, you agree to our use of cookies.