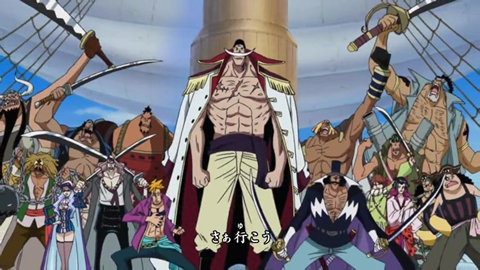 Go ahead, just try to take 'em all on at once.

A Badass Family, even if they're not related. This will turn up a lot when discussing the Superhero Team, The Squad, and the Five-Man Band. And a fair number of Sci-fi shows set aboard a ship, since normally, even the baddest hero can't run a whole Cool Ship on his own. This isn't a requirement though.

Some general conventions that apply to almost all Badass Crews are:

Since, unlike a Badass Family, none of the members were born into the Crew (though some of them might be blood relatives), some writers will use the story of the Badass Crew's formation as an interesting origin story. In most Action/Adventures and Sci-Fi/Fantasy stories, the badasses came together to foil a Big Bad and/or save the world.

The members of the Crew may not have even liked each other at first or even been outright enemies, but they come together and join forces because a) none of them can defeat the Big Bad and his plot without total cooperation, b) they worked out their differences, c) they see the badassness in each other and recognize a kindred spirit, or d) all the above.

The Badass Crew may be or have been a Ragtag Bunch of Misfits. Amazon Brigade is an all-female variation of this. The logical extension of this is the Badass Army where they are essentially a gigantic Badass Crew. Almost invariably a Caper Crew doubles as a Badass Crew.

Also see Misfit Mobilization Moment, which is often an origin for the Badass Crew.

Examples of Badass Crew include:

A great number of Sports teams are this:

Retrieved from "https://allthetropes.org/w/index.php?title=Badass_Crew&oldid=1934064"
Categories:
Cookies help us deliver our services. By using our services, you agree to our use of cookies.