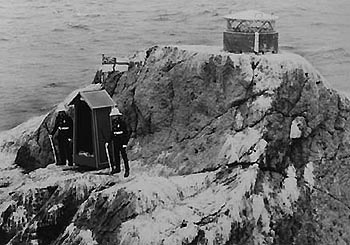 They must've screwed up big time to deserve this.

When a character is transferred to a remote and/or unpleasant outpost as punishment for annoying the higher-ups for some reason (bad job performance, personality conflicts, or perhaps good job performance that a superior finds threatening).

If this happens to The Hero, expect Reassignment Backfire.

The others there are often a Ragtag Bunch of Misfits at best, since their Backstory will always include a reason to send them there. Since it is so remote, they may have to face down the danger without assistance.

When The Hero is not sent there, this is often the explanation of why a response to a new danger, which first appeared at a remote outpost, is so feeble, allowing the danger to swell to the proportions it will later assume: the characters there are a rotten lot.

See also: Kicked Upstairs, in which the new job appears not to be a punishment. Closely related to Punishment Detail, where the assigned task is a punishment rather than the location. The Last DJ and other characters that are likely to put Honor Before Reason may be threatened with this sort of reassignment, or have it really done to them. Can overlap with Place Worse Than Death. Compare Locked Away in a Monastery.

Can also be a form of Put on a Bus or The Exile.

If the character in question is reassigned to a likely fatal job, this becomes The Uriah Gambit.

Super-Trope to Exiled to an Island.

(Incidentally, the picture shows actual Royal Marines occupying Rockall, which really is a lump of rock sticking up in the middle of the Atlantic. The UK government claims it because it gives it territorial rights to the sea around it. They didn't have to stay there long though.)

Examples of Reassigned to Antarctica include:

Retrieved from "https://allthetropes.org/w/index.php?title=Reassigned_to_Antarctica&oldid=1954915"
Categories:
Cookies help us deliver our services. By using our services, you agree to our use of cookies.