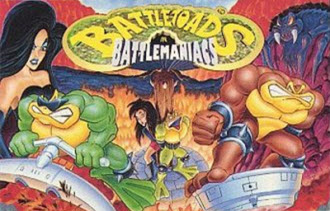 "Hello, Gamestop? Do you have a copy of Battletoads?"

A side-scroller that hitched a ride on the Teenage Mutant Ninja Turtles craze of the late 80's and early 90's, this was Rare's first major franchise. To many people, the pinnacle of Nintendo Hard games, Battletoads is the story of Zitz, Pimple, and Rash, three poorly-named heroes who fight the Dark Queen with the assistance of their Mentor, Professor T. Bird. When Pimple gets kidnapped along with Princess Angelica, Zitz and Rash go forth to rescue their comrade.

Nintendo Power ran a comic based on the game that was divergent in several areas, which was later used as backstory for later incarnations of the franchise. There was also a failed pilot for a Battletoads Animated Adaptation which used a notably different backstory.

While the game did have several sequels (including a Intercontinuity Crossover with Double Dragon and an arcade game that played as a straight Beat'Em Up), most of these were not nearly as popular, and for the most part only the original is remembered at all. Despite the rapid downturn of popularity -- not necessarily quality -- for later games, quite a few people still want to see the franchise revived.

Tropes used in Battletoads include:
Retrieved from "https://allthetropes.org/w/index.php?title=Battletoads&oldid=1700826"
Categories: