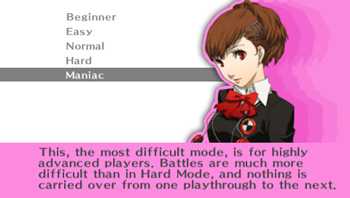 Many games have several difficulty levels for the player to choose from: there's "Easy," there's "Hard," and usually one in between the two, which is typically "Medium." However, "Hard" often turns out not to be the hardest level: there's an even higher difficulty level which puts "Hard" to shame. Sometimes this can only be selected if you've already beaten the game, or beaten it on "Hard".

Of course, some games have their own names for the standard difficulty levels as well as for their ultra-difficult setting.

In many games, difficulty settings that are denoted as Harder than hardest often indicate they are not adequately playtested, and the game might be unwinnable at that setting.

Some games get so notorious for these modes that people will forget that normal (and easy) modes exist and only base their opinion off of the hardest difficulty modes, even if the normal difficulty is actually pretty sane.

Examples of Harder Than Hard include:

Retrieved from "https://allthetropes.org/w/index.php?title=Harder_Than_Hard&oldid=1937046"
Categories:
Cookies help us deliver our services. By using our services, you agree to our use of cookies.