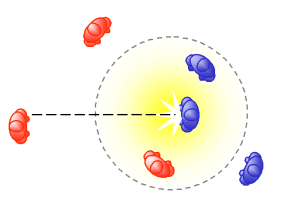 Quoting Wikipedia: "Although only the blue player in the center takes a direct hit, everyone within the circle takes splash damage. The damage may decrease further from the point of impact; this is known as damage falloff."

Don't you hate it when your opponent decides to rush you with a horde of mooks so that you have to aim and take out each and every one while they swarm you? That's what good old Splash Damage is for! Their swarms of disposable mooks are no match for a well placed artillery shell blowing them all to pieces.

Most weapons have to hit their target directly to be effective—but some lucky few merely have to hit near the target since damage occurs in an area around their impact point. This Splash Damage usually represents explosives; it commonly applies to rockets and bombs, but can (and surprisingly frequently does) show up on more exotic and powerful weapons like BFGs and Energy Weapons.

Splash Damage is typically distance dependent: the closer you are to the hit, the greater the pain. Usually, such a weapon will also do a fixed amount of additional damage if it scores a direct hit. However, some weapons (such as grenades) deal out splash damage exclusively.

In contrast, an Area of Effect weapon has constant damage/effects over its footprint.

This quality usually makes a unit very valuable in RTS games, where even very weak attacks can be highly effective in the right circumstances or in sufficient numbers, because a particular unit or tactic involves tightly bunching up a cluster of units, meaning that even a weak attack does that damage to every single unit in the cluster, making it a rather powerful attack.

Examples of Splash Damage include:

Retrieved from "https://allthetropes.org/w/index.php?title=Splash_Damage&oldid=1739446"
Categories:
Cookies help us deliver our services. By using our services, you agree to our use of cookies.