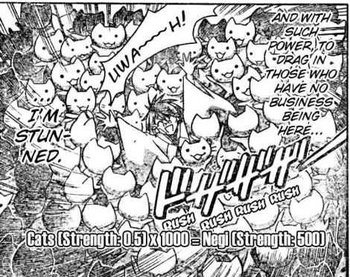 If you can hit something with your weapon, you can damage it, however slightly. And if you can damage it, you can defeat it just by hitting it enough times. The exact nature of the attack, and how well-armored the target happens to be might affect this, but the fact remains that in many works, huge imposing enemies can be brought down by way of multiple attacks that, taken on their own, barely qualify as pinpricks. Crippling Overspecialization can make this even worse, if it isn't properly balanced.

As the riddle of The Hobbit said of Time: "This thing all things devours: Birds, beasts, trees, flowers; Gnaws iron, bites steel, Grinds hard stones to meal; Slays king, ruins town, and beats high mountain down." Which means that, if you hit anything enough times with anything, the thing being hit will go apart. Well, unless the thing doing the hitting blunts or breaks first.

Note that there is some Truth in Television here: by the final years of World War II, infantry units had worked out how to take on tanks even without armor support. Presumably the spearmen attacking helicopters have picked up some black-market rocket-propelled grenades along the way.

Usually used by the Fragile Speedster or the Stone Wall, the former is fast enough to avoid being hit, but has abysmal attack compared with others, and the latter is durable enough to take the damage with a straight face, but unlike the speedster, has a weak offensive.

Compare Wafer-Thin Mint. See also Zerg Rush, Gradual Grinder and Cherry Tapping. Can be delivered quickly through a Spam Attack or by the members of a Zerg Rush. Someone who is Weak but Skilled may end up relying on this. Depending on how heavily protected the target is, More Dakka may be involved. If it succeeds, the victim may suffer a Rasputinian Death.

Examples of Death of a Thousand Cuts include:

Retrieved from "https://allthetropes.org/w/index.php?title=Death_of_a_Thousand_Cuts&oldid=1965017"
Categories:
Cookies help us deliver our services. By using our services, you agree to our use of cookies.