Everything About Fiction You Never Wanted to Know.
(Redirected from X-COM)
Jump to navigation Jump to search 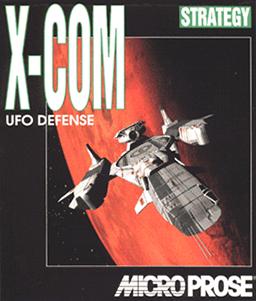 The brainchild of Julian Gollop and other assorted Microprose personnel, UFO: Enemy Unknown was a strategy game produced in 1993 and unleashed upon the European gaming public. A year later, it jumped the pond to grace American players as X-COM: UFO Defense, since there was a naming rights conflict with an obscure 1989 flight sim by subLOGIC called UFO.

By either name, X-COM puts the player in command of an eXtraterrestrial COMbat unit charged with protecting Earth from an alien threat, managing resources and researching captured technology in the process. The hybrid of Real Time Strategy (improving X-COM's overall condition and catching UFOs as they land - or crashing them yourself) and Turn Based Tactics (exploring crash sites, stopping terror attacks, and defending and assaulting bases) quickly won the hearts of the gaming public.

More than 15 years after its initial release, UFO Defense still attracts players and tops lists of the Best PC Games of All Time. A 2007 assessment by IGN has it edging out fellow Prodigal Son of Microprose Sid Meier's Civilization IV for the Number 1 slot.

Not to say the X-COM legacy is a solo act, however. While Gollop's team set to work on X-COM: Apocalypse, an in-house crew at Microprose beat him to the punch with X-COM: Terror From The Deep in 1995, a Mission Pack Sequel created to satiate player demand for more alien-assaulting action. Apocalypse hit the shelves in 1997, to mixed reviews due to its Art Shift into pseudo-3D futuristic graphics and the clunkiness of a newly-introduced real-time option for playing missions. The last days of Microprose (and its acquisition by Hasbro Interactive) saw X-COM trying to get back on its feet with two Genre Shifted offerings: X-COM: Interceptor (1998) kept the base management elements while swapping out the strategy missions for space-bound Flight Simulator action, while X-COM: Enforcer (2001) ditched the strategy part outright to make a First Person Shooter running parallel to the timeline of UFO Defense. Sadly, neither had the mystique of their ancestors, and are often shunted away from canon due to the Unexpected Gameplay Change (and in the case of Enforcer, being awful).

While the X-COM license was passed through a variety of incapable hands throughout the 2000s, the earlier games attracted a variety of player-made mods and remake attempts in numerous stages of completion. Various Spiritual Successors also exist, such as UFO: Aftermath and its sequels Aftershock and Afterlight (unrelated to the game UFO listed above), the Game Boy Advance sleeper Rebelstar: Tactical Command, Laser Squad: Nemesis (in and of itself a sequel to X-COM's own predecessor Laser Squad) and UFO: Extraterrestrials which is almost an exact remake of the original game. All have attracted moderate attention from X-COM fans, largely for either the similarity in gameplay (the UFO: After Blank series) or the connections to Gollop and other former X-COM staff (Rebelstar and Laser Squad). Fans have also made their own remakes, most notably UFO Alien Invasion and Xenonauts.

Due to the entire series being re-released on Steam X-COM has experienced a resurgence among retro gamers, especially those eager to chronicle their campaigns.

An FPS reboot was announced in 2010, developed by 2k Marin, the team behind BioShock 2. The fanbase reacted in a manner predictable to everyone except, apparently, 2K Games, even going so far as to dub it things like "XenoShock" and "XINO" ("X-Com In Name Only"). This seems to be due to a combination of the bitter taste left behind by Enforcer and an understandable lack of enthusiasm for the direction the developers seem to be taking the game (with changes such as the possible wholesale dumping of the previous games' canon, X-COM being a division of the DoD as opposed to a Multinational Team, the focus era being shifted to a "Pleasantville" version of the sixties and the move from cerebral turn-based strategy to the Third Person Shooter gameplay seen in the trailer).

The fandom's response to the reboot announcement was heavy enough that Firaxis Games (a subsidiary of 2K) announced XCOM: Enemy Unknown, a new strategy entry in the series developed by Firaxis Games(Devs of Civ 5). And the Fandom Rejoiced! It was released with great anticipation on October 9, 2012. It was received well enough to receive an expansion pack, called XCOM: Enemy Within, which featured an expanded roster of human and alien units and technologies, as well as EXALT, a treasonous human faction. First-glance description: aping the "fancy" shooters with bells and whistles, Achievements, DLC, and graphics with pointless glowy bits, but game mechanics made in a solid style resembling Only War adapted for X-Com setting.

Meanwhile, the original reboot, The Bureau: XCOM Declassified, was released in 2013 to lukewarm reviews -- it wasn't bad, but it didn't wow anybody, either. After much speculation on the degree of canonical interconnection between the FPS and the strategy game, the case has been finally laid to rest by associate producer Pete Murray: "They're in their universe; we're in our universe," he says. "We do talk with [2K Marin], but thematically, they're separate."

In 2015, Firaxis announced a sequel to Enemy Unknown, simply titled XCOM 2, that's released on 5 February 2016. Rather than continue the storyline with the typical "Congratulations on defeating the aliens, now have some more aliens!" maneuver, XCOM 2 follows from a canon ending that XCOM lost hard.[1] The aliens have taken over the planet, publicly appearing to be benevolent rulers. The remnants of XCOM went underground, suspecting that the aliens' motives were not so altruistic, and twenty years later, they're ready to bring together the various resistance cells and take back the planet. The game has received similar accolades to its prequel and has received a number of DLCs. The latest DLC expansion, War of the Chosen is slated for a 28 August 2017 release.

Terror From The Deep