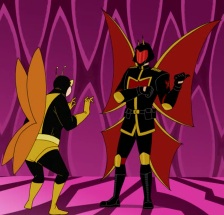 One of the Monarch's Black Guards telling a lesser henchman to go to his room without supper.

When the enemies are too easily taken down by the heroes and there is a need to increase the challenge, the easiest way to is to upgrade the Mooks into Elite Mooks. They may come with better weapons, additional skills, or various powers the normal Mooks do not possess. The look of the Elite Mooks may be noted with various appearance changes from a simple Palette Swap, adding Spikes of Villainy, and other cosmetic alterations that make them stand out from the crowd of regular Mooks.

Any variety of Mooks can be upgraded to become an Elite Mook, which can yield a Boss in Mook Clothing or Superpowered Mooks. Mooks can be transformed into Cyborgs, Zombies or EliteZombies if they already zombies, made into Super Soldiers, or upgraded in other various ways.

Not to be confused with the generally solitary Giant Mook or Heavily Armored Mook. Contrast King Mook, which is a larger version of a typical Mook.

Examples of Elite Mooks include:

EvilTemp is a subsidiary of Trope Co.

Retrieved from "https://allthetropes.org/w/index.php?title=Elite_Mooks&oldid=1920667"
Categories:
Cookies help us deliver our services. By using our services, you agree to our use of cookies.