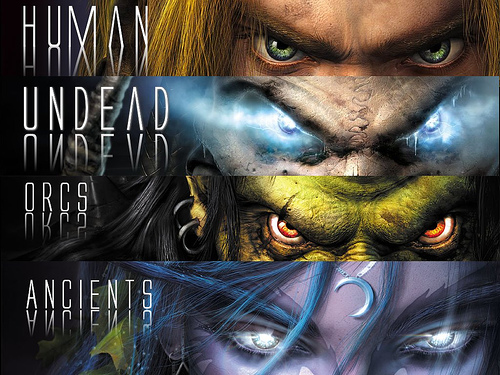 Warcraft: Orcs and Humans tells the story of the kingdom of Azeroth, which is attacked by a Horde of green-skinned marauders that are hell-bent on exterminating the human population. The player is either a valiant human lord who beats back the orcs and gets crowned the monarch of Azeroth after King Llane dies, or an orc general who crushes the noble capital of Stormwind and betrays his warchief, becoming the new leader of the orcs.

In Warcraft II: the Tides of Darkness, we discover that while elements of both campaigns happened, the orc campaign victory was Canon. The new orc warchief (Orgrim Doomhammer, who slew Big Bad Blackhand after the conclusion of the previous game) is creating a Horde more dangerous than ever by enlisting creatures such as trolls, ogres, dragons and goblins into its ranks, while the surviving humans of Azeroth (led by the human commander from the previous game, Lord Anduin Lothar) have fled across the seas to the countries of Lordaeron and created an Alliance consisting of humans, elves, dwarves and gnomes. Soon, the two juggernauts face each other over global domination. Again, while missions from both sides occur, the Alliance victory is canonical, but Lothar, their greatest hero, falls; Doomhammer flees into exile. In the Expansion Pack Warcraft II: Beyond The Dark Portal, the Alliance pursues the beaten Orcs to their dying homeworld of Draenor to stop them from gathering reinforcements... and discover a far darker plot. Ner'zhul, a powerful Orc warlock, decides to use several ancient artifacts to open doorways from Draenor to other worlds for the Orcs to conquer. The foiling of his plot finally seems to spell an end to the red planet. The Orcs remaining on Azeroth are rounded up and placed in internment camps. The other creatures of the Horde go their own ways.

An Adventure Game was planned, called Warcraft Adventures: Lord of the Clans, which would detail the Horde shaking loose their demonic influences and make a Heel Face Turn under the leadership of a human-raised Orc named Thrall, but the game was cancelled supposedly due to low quality (it was animated by the same studio as the Mario and Zelda CD-i games). The key elements of its story were then used for one of the tie-in novels, Warcraft: Lord of the Clans.

Lord of the Clans' plot was worked into the backstory of Warcraft III: Reign of Chaos, which added the Night Elves and Undead as playable factions. In the game, the Horde, now under Thrall, flees Lordaeron on advice from a human prophet. Shortly after, the Scourge (an undead army created by the demons who had corrupted the orcs in the first place, and led by Ner'zhul, trapped in an almost formless existence) assaults the Alliance, which was already beginning to fracture politically. The Elves of Lordaeron are decimated, Lordaeron's prince Arthas becomes the Scourge's most powerful minion due to his lust for vengeance, and his former lover and princess of the nation of Kul Tiras, Jaina Proudmoore, takes any survivors she can over the sea... again, on advice from the prophet. Across the sea, on Kalimdor, the Horde has allied with a native race, the Tauren, and found a new tribe of Trolls that can join them. The Alliance arrives soon after, and again following the words of the Prophet, unite against their greater foe: the Scourge and their burning masters. But their settlement does not go unnoticed: the Night Elves, led by Tyrande Whisperwind, see the outlanders as despoiling Kalimdor... until faced with the horrible reality of the Scourge, and facing again the Burning Legion after ten thousand years. The truce between the Horde and Alliance expands to include the Night Elves, and their combined forces are enough to break the Burning Legion's advance and slay its leader. Despite the victory, Lordaeron is left ravaged, and the Scourge is feasting on the bones.

The expansion pack Warcraft III: The Frozen Throne focuses on the secondary night elf Anti-Mage Anti-Hero Illidan Stormrage, who is hired by the Burning Legion's new lord to kill the Lich King, the ruler of the Scourge, who through his machinations and indeed his dealings with Illdan had ensured the demons' loss despite ostensibly serving the Legion. Illidan hires the serpentine Naga, night elves corrupted by ancient magic, to help himself achieve the task, but is stopped by his people, who think he was trying something more villainous. Desperate now, he flees in search of new allies and a place to hide. In Lordaeron, the Blood Elves (the scraps of of the Elven civilization the Scourge had destroyed) are cast aside by Alliance's bigoted commander... and are aided by Illidan and his Naga, who go into hiding in the shattered remnant of Draenor. Illidan cannot hide from his master, however, and turns his focus back to the Scourge, settling on all-out assault with his new allies. Arthas, now calling himself King of Lordaeron, finds himself dealing with a rebellion led by minor lords of the Legion and some of the enemies he had killed and brought back as undead allies, who have regained their minds with the Lich King so harried. One of them, an Elven general named Sylvanas Windrunner, takes commanad of the rebellious undead and carves out a new nation for them. Arthas has no time to deal with her, however, and hurries to save his Master. He and Illidan battle in Northrend, and the death knight defeats Illidan, sending him and his allies packing. Arthas then goes to his master and enacts the Lich King's masterstroke: their bodies and minds fusing permanently into one of the most powerful beings on the face of Azeroth.

Meanwhile, Thrall and the Horde settle down and the orcs begin work on their new capital city Orgrimmar. The traveling beast master Rexxar becomes involved in the orcs' work to forge a new homeland, but trouble rears its ugly head when Admiral Daelin Proudmoore, Jaina Proudmoore's father and an Alliance hero from Warcraft II: the Tides of Darkness, shows up. Jaina has built a city for her refugees called Theramore Isle, and has been able to maintain peace with the nearby Horde. However, her father still hates the orcs for their demon-fueled war crimes, and, unwilling to see that they have changed, takes control of Theramore from his daughter and begins to attack the Horde. After helping the trolls evacuate to Orgrimmar, saving the tauren leader Cairne Bloodhoof's son, and taking over a clan of ogres, Rexxar is declared the Champion of the Horde, and the Horde attacks Theramore. In return for Jaina's aid in stopping her father, Thrall agrees to spare her soldiers, so Rexxar and his posse of Cairne, the troll scout Rokhan and the pandaren brewmaster Chen Stormstout go and kill Daelin while the forces of the Horde and the Admiral fight. Daelin is slain, Jaina is sad, and the Horde leaves the city of Theramore to rebuild.

Warcraft's success eventually gave birth to the MMORPG monster World of Warcraft, which retconned some of the backstory developed by the previous games. It also created the Warcraft Expanded Universe.

Tropes used in Warcraft include:
Retrieved from "https://allthetropes.org/w/index.php?title=Warcraft&oldid=1757793"
Categories:
Cookies help us deliver our services. By using our services, you agree to our use of cookies.