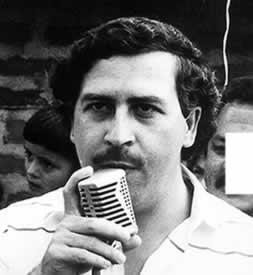 Meet the Face of Cocaine Kingpins

In the underworld, there are several factions, usually based on location and ethnicity. The Cartel is an umbrella term for many mafia-like groups based in South America. In real life, these cartels are behind trafficking cocaine, and occasionally arming and supporting various armed groups, both revolutionaries and counter-revolutionaries. Cocaine supplied to the US is refined to Crack and sold by Gang-Bangers.

One of the most infamous cartels was the Medellin cartel, and its leader Pablo Escobar (pictured), who ran most of the cocaine trade in the Americas during the 80's and 90's, until Escobar was taken down by the Colombian Search Bloc with the assistance of the United States. Escobar's power and reach was so big during his heyday that he was (and still is) referred to as the "world's greatest outlaw." Additionally, the financial magazine Forbes described him as the 'world's richest criminal'.

The Cartel was a popular villain in fiction during the 80's and the 90's, when the drug trade made the headlines big time.

For their adversaries and affiliates, see The Mafia and Gang-Bangers. See also The Syndicate. Usually the Ruthless Foreign Gangsters in works set during the 80's, and occasionally engaged in a Mob War with another organized crime group.

Examples of The Cartel include: