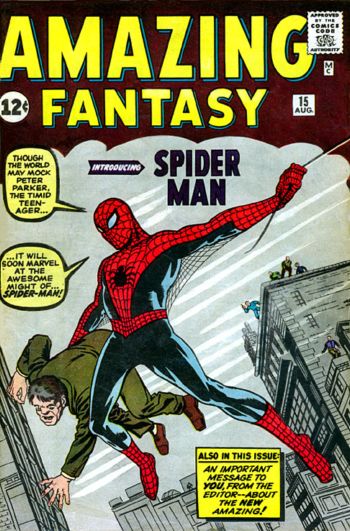 The arachnid-powered Superhero was relatively new to Marvel Comics when he made his TV animation debut in 1967. Peter Parker, a high school student and freelance news photographer, acquired his powers from a radioactive spider bite. As the web-slinging, wall-crawling Spider-Man, Peter fights crime while trying to keep his identity secret from his widowed Aunt May and from the public at large. The show's main contribution is the Theme Song ("Spider-Man, Spider-Man/Does whatever a spider can...") which has become a popular standard.

In the 1970s, a silent costumed actor played Spider-Man on The Electric Company, who only spoke in word balloons viewers were expected to read. Subsequent Animated Series teamed Spider-Man with other heroes, such as Firestar and Iceman. This period saw the beginning of the long-running newspaper comic Spider Man.

Spider-Man was also featured in a short-lived 1970s live-action series (which was pulled when the network noticed that they were running an awful lot of superhero shows at the same time -- Spider-Man was a contemporary of Wonder Woman, The Incredible Hulk and The Six Million Dollar Man).

A live-action Spider-Man was also produced as a Toku series in Japan, which borrowed the costume but little else, and teamed the arachnid hero with a Humongous Mecha. (This series inspired the development of the Super Sentai franchise.)

In 2002, Sony Pictures released the first in a series of Spider-Man feature films starring Tobey Maguire and Kirsten Dunst and directed by Sam "Evil Dead" Raimi. The success of this film helped spark the Marvel superhero movie boom of the 2000s. This eventually ended after three films. A second attempt was made by 2012, directed by Marc Webb and starring Andrew Garfield, but also faltered at two entries. A third reboot, this time as part of the Marvel Cinematic Universe, started in 2017 with Jon Watts at the helm and Tom Holland as Spidey, though this version actually made his first appearance a year earlier in Captain America: Civil War. Meanwhile, a film starring rogues' gallery member Venom directed by Ruben Fleischer and starring Tom Hardy that ironically doesn't mention Spidey at all was released in 2018, with a 2021 sequel following.

A Broadway Musical based on the characters started production in 2010, called Spider Man Turn Off the Dark. It was originally directed by Julie Taymor and features music written by Bono and the Edge. The production has been plagued with injuries stemming from the stage machinery used to make its titular character swing through the air. After a disastrous series of previews in which critics savaged the show and Julie Taymor's departure from the show, the book was completely rewritten before it's much-delayed official debut in June 2011. Despite the fact that reviews were only marginally better, the show continued to sell well in spite of (or possibly because of) the reputation it gained on Broadway.

Spider-Man is the Trope Namer for:
The following tropes are common to many or all entries in the Spider-Man franchise.
For tropes specific to individual installments, visit their respective work pages.
]
Retrieved from "https://allthetropes.org/w/index.php?title=Spider-Man&oldid=1959736"
Categories:
Cookies help us deliver our services. By using our services, you agree to our use of cookies.