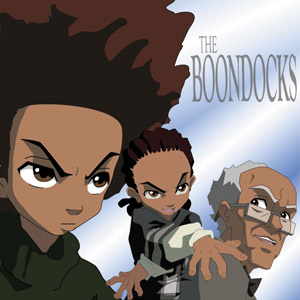 The comic strip largely began as a "Fish Out of Water" theme, dealing with Huey and Riley adjusting to life in the predominantly white town of Woodcrest. Huey serves as the main character of the series, with Riley as his comedic Foil. The two characters serve as political opposites for each other: Huey Freeman is intelligent, radically political, and has a rather cynical view on life. This eventually drives him to write his own newsletter where he vents his frustrations towards the black community with help from his best (and far more moderate) friend Caesar. Riley, on the other hand, is a wannabe thug and prolific schemer. What he lacks in social consciousness, he is more than willing to make up for in threats of violence. Their caretaker is Robert "Granddad" Freeman; a hardline disciplinarian who is quick to use his belt to keep his grandchildren in line. Though the cliche of the old, out of touch grandparent, various strips show "Granddad" as being a somewhat lecherous old man who hides his own wild side for the purposes of providing his grandchildren a strong parental figure.

Other characters introduced in the comic strip include Tom Dubois, a successful, politically mainstream black lawyer who works for the district attorney's office, who serves as a foil for the cynical Huey. Much of the humor of the strip comes from the idealist Tom interacting with the cynical Huey, who views Tom as a sell-out due to his rather passive nature. Huey also has an adversarial relationship with Tom's biracial daughter Jazmine, whose overwhelming naivete makes her believe everything she is told by adults.

The comic strip was widely unknown until after the events of the September 11th, 2001 terror attacks when the strip gained national attention for writer Aaron McGruder's decision to have the series directly address the political aftermath of the attacks as far as bringing attention to the claims that ties that existed between the Taliban, Osama bin Laden and the Republican Party, of which members of the Reagan administration (later part of the Bush Administration) had helped fund and train Taliban and bin Laden in the 1980s to fight the then-invading Soviet Union. The strip itself also took a very critical stance against George W. Bush and his handling of the aftermath of September 11, something very few people in the media were willing to do. This made the series a darling of Bush's critics and made McGruder famous.

For those of you who missed the comic (which ran nationally from 1999 to 2006) you can find it here.

Spawned a successful animated version, which has caused no small amount of conflict due to its lessened emphasis on topical political references (which would have been impractical considering the extended production and turnaround time when compared to the comic). It instead focused on critiquing and satirizing long-standing controversies within both black and mainstream American society, as well as expanding or changing several of the characterizations, and adding in a few kung fu fights for kicks. For this, the animated series can be considered to be in an alternate continuity from the comic. Note that a lot of the tropes on this page apply to one or the other (and the TV show seems to be better represented).

Not to be confused with The Boondock Saints.

Tropes used in The Boondocks include:

And later, as one of his bitches beats on Tom.

Retrieved from "https://allthetropes.org/w/index.php?title=The_Boondocks&oldid=1861695"
Categories:
Cookies help us deliver our services. By using our services, you agree to our use of cookies.