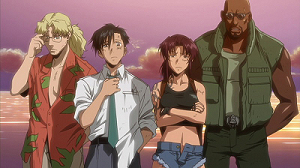 Just your everyday group of couriers.

Black Lagoon, a Seinen action manga series created by Rei Hiroe (which received an anime adaptation courtesy of Madhouse), starts by introducing the audience to Rokuro Okajima: after barely graduating from a Japanese community college and landing a job as an underpaid Salaryman in the shipping and handling department of Asahi Industries, Rokuro seems destined to live a life of abused mediocrity as a small cog in a large corporate machine.

Rokuro's life changes forever when the company asks him to deliver a data diskette to a customer in the South China Sea—his ship comes under attack by pirates with a torpedo boat, who nab the disc and bring Rokuro with them as a hostage for ransom. Twenty-four hours later—after a series of events that include being nearly shot by his captors, surviving a bar shootout, being chased by a gunship helicopter, and being declared legally dead by his own company—Rokuro (now rechristened with the nickname "Rock") joins up with the pirates, who run a small boat courier service known as the Lagoon Delivery Company.

Rock's compatriots in the Lagoon crew include:

The crew makes their living out of the fictional Thai city of Roanapur by "acquiring" goods (legal or otherwise) and delivering them, no questions asked, on behalf of the various criminal elements who effectively run the city—and at times, the crew has to "persuade" the owners to hand over the goods...

Do not confuse this series with Creature from the Black Lagoon.

Tropes used in Black Lagoon include:

Guess what happens right after they drive away. (Although under the circumstances it could be a case of unintentionally Genre Savvy.)