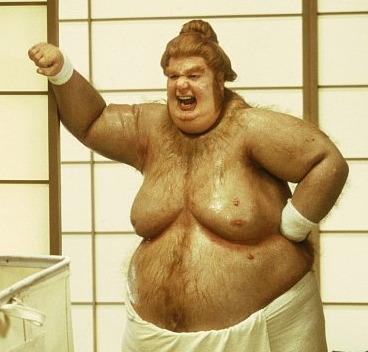 On the inside you will not find true beauty.

Also called fatbastarditis. Once a television character reaches a certain level of tubbiness, the show they are in will lose all sympathy for them. It is generally assumed that overweight people are either pathetic, obnoxious losers or Corrupt Corporate Executives. They also tend to be portrayed as ludicrously obsessive eaters. Furthermore, most are portrayed as lazy, having poor hygiene, bad grooming, and no fashion sense. Glandular conditions, genetic tendencies, a natural endomorph body type, and low metabolism are treated as lame excuses alongside the "I'm just big-boned" mold.

This trope first shows up with the introduction of synthetic, high-fat foods in the early twentieth century, which enabled people from most social classes to gain weight quickly. Prior to that point, being fat was considered high fashion- a fat wife, for example, proved that the Railroad Baron had enough money to feed her a lot. Hence how we can go from the Santa Claus character type of rich and jolly to the modern character type of greedy, lazy, and evil.

Interestingly, some comedians (usually fat ones) complain about Political Correctness Gone Mad when it comes to fat jokes... although the sheer quantity of recent examples we have amassed tend to disagree on this front. Obesity is so universally seen as a negative character trait that it's relatively common for characters to be given some Adaptational Attractiveness to offset this fact.

Compare Big Eater and Villainous Glutton (often with Jabba Table Manners). Fat Bastard and Big Eater are usually (but not always) mutually exclusive. While Fat Bastard is often fairly ugly, the Big Eater usually has a somewhat pleasant appearance. This is because the first character is played for villainy and the second for laughs. Dead Weight is this type... but undead!

This trope is named after the character from the Austin Powers movies. He epitomizes this trope to such a ridiculous extreme that it qualifies as parody.

See Also Big Fat Future. Fat Idiot portrays a similarly negative image of the overweight, though not necessarily an unsympathetic one (there are plenty of dim but good hearted fat characters). Contrast Big Fun, who is fat, jolly and great fun to be around. Contrast Big Beautiful Man who is attractive because he's chubby. Also see Large and In Charge which can have some overlap with this trope (along with Corrupt Corporate Executive and other bad leader tropes), though you don't necessarially have to be fat to qualify. There is also some overlap with Adipose Rex, though it is possible for a royal to be fat and not a bastard. Often stems from Evil Is Bigger.

Examples of Fat Bastard include:

Retrieved from "https://allthetropes.org/w/index.php?title=Fat_Bastard&oldid=1964814"
Categories:
Cookies help us deliver our services. By using our services, you agree to our use of cookies.