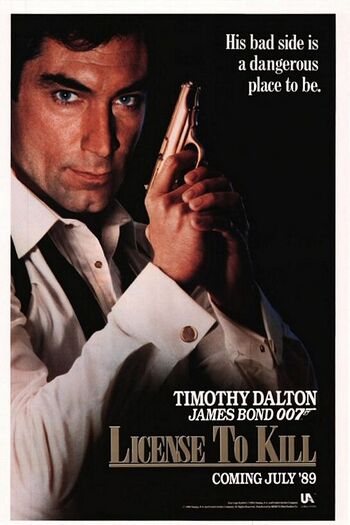 And they are not kidding about the tagline.

The 16th James Bond film, starring Timothy Dalton in his last appearance. After an escaped drug lord brutally attacks Bond's friend Felix Leiter, Bond starts a personal vendetta against him that requires him to become a disavowed agent in the process.

It is a polarizing film, with some viewing it as a cheap attempt to be Darker and Edgier and cash in on the late '80s Miami Vice craze, while others view it as a welcome return to the style of the books (the film uses elements from Ian Fleming's original novels of Live and Let Die and The Man With the Golden Gun--additionally, both Dalton and Robert Davi used the novel of Casino Royale to help define their characters). It was also affected by the 1988 Writers' Strike, with Michael Wilson having to finish off the script on his own.

Though the film tested better than any previous Bond film (not considering inflation), and did very well overseas, it flopped in America, due to a poor promotional campaign and even poorer release date (the late summer of 1989, after half a dozen action blockbusters had already cleaned up at the box office). A third film with Dalton was planned, but legal issues kept the series in a long-running hiatus.

Tropes used in License to Kill include:
Retrieved from "https://allthetropes.org/w/index.php?title=License_to_Kill&oldid=1759810"
Categories:
Cookies help us deliver our services. By using our services, you agree to our use of cookies.