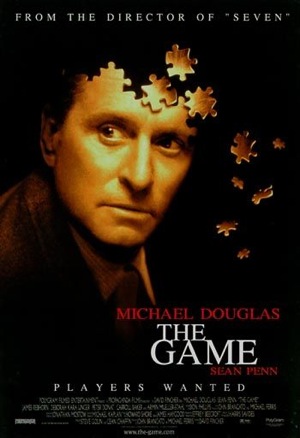 "I don't care about the money. I'm pulling back the curtain. I want to meet the wizard."

The Game is a movie centered around Nicholas van Orton (Michael Douglas), a bored, disillusioned businessman who spends his days in his office (complete with shower). His life is extremely well-ordered -- he has even driven out all romantic prospects (including one marriage) -- until the day his brother Conrad (Sean Penn) gives him a gift certificate for a group called Consumer Recreation Services that livens up their customers' lives by playing a potentially-dangerous game with them.

Nicholas, intrigued by this, signs up for one of the company's games -- and soon finds himself threatened to the point of death by a group that possibly has some ulterior motives regarding his money...

Tropes used in The Game (film) include:
Retrieved from "https://allthetropes.org/w/index.php?title=The_Game_(film)&oldid=1621208"
Categories: