Distracted by the Sexy 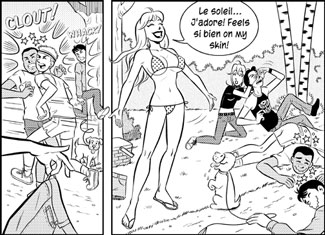 And she isn't even doing it on purpose.

For some men, it's very easy to forget what they are doing when a gorgeous woman strolls past and lose control, doing things like walking into walls, tripping over themselves, dropping fragile objects, etc. Mostly a comedy trope.

If this induced intentionally by the woman in question when We Need a Distraction, it falls instead into Show Some Leg.

Compare Show Some Leg, Sex Sells, Sexy Coat Flashing. Contrast, naturally, Not Distracted by the Sexy and Ignore the Fanservice. If the viewers are the ones Distracted by the Sexy, that's Best Known for the Fanservice. If communication is attempted, it can cause Gibberish of Love. If a character distracts themselves by noticing their reflection in a mirror, that's Distracted by My Own Sexy. See Cuteness Proximity for the non-sexy, non-human variant. Compare also with Screw the Rules, I'm Beautiful.

Examples of Distracted by the Sexy include:

Retrieved from "https://allthetropes.org/w/index.php?title=Distracted_by_the_Sexy&oldid=1807625"
Categories:
Cookies help us deliver our services. By using our services, you agree to our use of cookies.