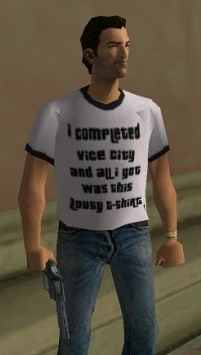 You finally beat the Big Bad and even The Man Behind the Man. After the credits roll and seeing you opened up New Game+, what do you get as a reward? Clothes. Yes, you did all that hard work and all you got was a lousy pair of pants!

Lots of games today and in the past love to reward players for their hard work by offering new clothes for the playable characters to try out. Most of the time, the clothes are just for cosmetic purposes which may or may not appear in a rendered cut scene. However, there are some cases where new clothes can actually affect your performance in your next game, such as having more defense. Some clothes may also be a Shout-Out to another game.

A Sub-Trope of both Cosmetic Award and Unlockable Content.

Compare Virtual Paper Doll, Changing Clothes Is a Free Action, Gorgeous Garment Generation. And All I Got Was This Lousy T-Shirt may be considered a subtrope.

Examples of And Your Reward Is Clothes include:

Retrieved from "https://allthetropes.org/w/index.php?title=And_Your_Reward_Is_Clothes&oldid=1927018"
Categories:
Cookies help us deliver our services. By using our services, you agree to our use of cookies.