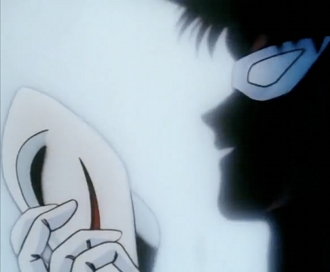 It appears that a reveal is being set up... but there's no reveal in the end.

Can be either frustrating or hilarious, depending on how badly the viewer wants the reveal, and how far the viewer was strung along expecting it.

If The Reveal is cancelled because the revealer suddenly dies, it's His Name Is--.

A Sound Effect Bleep can be used to create an Un-Reveal. Another weapon in The Un-Reveal arsenal is the end-of-episode cutoff.

A special case of Un-Reveal is when we think that the info withheld in an Unreveal earlier in the episode is finally going to be revealed now... only we're frustrated again.

A last type of Un-Reveal is the "you know the rest" gag: A character is giving historical information to another character, and ends by saying "you know the rest," even though the viewer does not. Usually done for comedic effect, since it's a good way to create outrageous Backstory without having to make it fit continuity. If this becomes a Running Gag, it's the Noodle Incident.

See also Missing the Good Stuff and Riddle for the Ages. Regularly used to add fuel to a Driving Question. Not to be confused with The Untwist.[1]

Contrast Emerging From the Shadows.

Examples of The Un-Reveal include:

Examples of "you know the rest"