The Road to Wellville 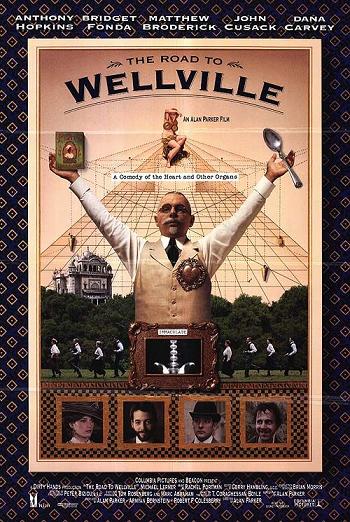 A comedic 1994 film about some early twentieth-century visitors to a singular health sanitarium run by Dr. John Harvey Kellogg, the crankish iconoclastic inventor of the corn flake. Kellogg is played by Anthony Hopkins, and in his own way is almost as scary as Hannibal Lecter. Fellow star Matthew Broderick is reported to consider this film an Old Shame.

Based on a novel by American author T. Coraghessan Boyle.

Tropes used in The Road to Wellville include:

Kellogg: Nurse Graves?
Graves: Yes Doctor?
Kellogg: Take Mister Lightbody immediately to the yogurt room and give him fifteen gallons.
Lightbody: Oh no, no. I can't eat fifteen gallons of yogurt.
Kellogg: Oh it's not going in that end, Mr. Lightbody.

Kellogg: ...You're dead, sir. Could you have picked a better place to die, Poult? Instead of out here in the street in front of everybody? Some poster child for biological living you are! [kicks him]