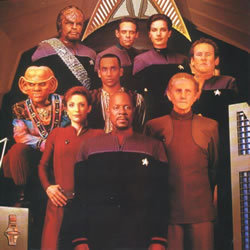 The second of the "next generation" of Star Trek shows, following on from Star Trek: The Next Generation, this series ran seven seasons. Deep Space Nine traded the Wagon Train to the Stars premise of the previous (and future) Star Trek shows for a "Fort Apache in Space" setting.

In the setting of the show, the native Bajoran people recently drove out the oppressive Cardassian Occupation through a war of attrition and a fair amount of terrorism (both Cardassians and the Bajoran Occupation were previously established on Star Trek: The Next Generation). The Bajoran Provisional Government petitioned The Federation for support, despite not being a Federation member. A relatively small crew was sent to take residence on an abandoned Cardassian station called Terok Nor, designated Deep Space 9 by the Federation, to aid the Bajorans in charge. In the first episode a rare stable wormhole was discovered leading to the Gamma Quadrant of the galaxy, and the station was relocated there to claim its use. The fixed base allowed the show to delve deeply into the politics of the Star Trek universe, but the addition of the wormhole also allowed exploration of unknown planets.

The storylines were split among several different areas: the first explored was the rebuilding of Bajoran civilization and the Bajorans' worship of the non-corporeal beings that resided in (and had built) the wormhole, known as the Prophets. Other major Story Arcs included the never stable relationship with the Cardassians and the dramatic discovery of The Dominion, a powerful counterpart to The Federation found on the other side of the wormhole. Both allies and enemies of the Federation had to deal with the impact of the Dominion War, which covered the last two seasons.

One of the factors that made Deep Space Nine unique was that every action had consequences. Nobody could solve all of their problems in just one episode, and, unlike its ship-based sister series, the crew couldn't just 'jump to warp' and leave the Problem of the Week behind. The writers used Story Arcs much more extensively than Star Trek: The Next Generation had and they took the time to slowly examine The Federation for what it truly was: a noble organization that still had problems with bureaucracy and skeletons in their closet. They also re-examined two episodes from Star Trek: The Original Series: "Mirror, Mirror" (in "Crossover") and "The Trouble With Tribbles" (in "Trials and Tribble-ations"). DS9 would further explore the Mirror Universe in subsequent episodes. [1]

Another key difference for Deep Space Nine was the unprecedented number - and depth - of the supporting characters. While all Star Trek series have large casts, Deep Space Nine is the only one that qualifies for Loads and Loads of Characters. It was also the only show to have a number of Fake Guest Stars, many of whom deserved a slot in the main titles. Supporting characters like Rom and Garak got more Character Development and background than many main characters on other Star Trek series; this was possible largely due to the use of Story Arcs, which were enabled, again, by Deep Space Nine being a fixed location.

For the first three seasons, the show focused on the aftermath of the occupation and the issues this dealt with, as well as throwing up look-what's-come-through-the-wormhole episodes. The show got a Darker and Edgier retool after season 4, with the addition of Worf to the regular cast and a Story Arc about the Dominion threat (which had started in season 2-3, and wouldn't become dominant until season 5). Part of this is due to the fact that the producers became more and more comfortable altering Gene Roddenberry's positive, optimistic future.

As a result of this kind of thing, the show tends to divide Trekkies a bit - most people who like Star Trek for the science fiction setting and the moral commentary dislike it because it tends to focus on drama and character conflict, treats the universe as a political backdrop, and dispenses with many of the utopian themes. On the other hand, those who do like DS9 tend to like it a lot more than they like the other Trek series, forming a little subculture of their own in Trek fandom known as "Niners".

In spite of the general divide within fandom itself, DS9 earned more critical accolades than even Star Trek: The Next Generation due to its intense Character Development, high-quality acting and pioneering use of Story Arcs; it is still regarded by many as the greatest and most underrated show ever to take the Star Trek name.

Information on the main and recurring characters can be found on the character page.

Retrieved from "https://allthetropes.org/w/index.php?title=Star_Trek:_Deep_Space_Nine&oldid=1762451"
Categories:
Cookies help us deliver our services. By using our services, you agree to our use of cookies.