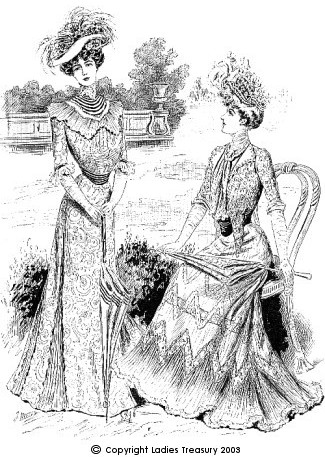 Strictly the term Edwardian Era only applies to the reign of King Edward VII from 1901 to 1910, but it is usually extended up to the outbreak of war to capture the end of an era. Sometimes referred to in America as the Gilded Age, although that also covers the entire period from the end of Radical Reconstruction to the U.S. entry in WWI, roughly 1880 to 1917 (therefore incorporating The Gay Nineties).

The subject of many nostalgic musical films featuring Gorgeous Period Dress from The Thirties through The Sixties (though The Fifties and The Sixties have many nostalgic settings featuring The Roaring Twenties), and the favorite period of the filmmaking team Merchant-Ivory. The page illustration is a good example of what the well-dressed Edwardian lady wore; note the large, elaborately decorated hats, S-curve silhouette (produced by the style of corset popular in that decade) and elbow-length white kid gloves.

(Take note, however, that there was a significant change in women's fashion about 1909 or 1910, dividing the era into two segments fashion-wise. After 1910, women's dresses tended to be simpler and more flowing in design, reminiscent of Regency-era dresses; tailored suits and dresses were very popular at this point, and the "Gibson girl" pompadour hairstyle faded away, to be replaced by simpler hairdos with a lot of curls, and bobbed hair and cloche hats were on their prototype forms. These years were the glory days of the so-called "Merry Widow" hat, the huge, elaborately decorated hats mentioned above. The S-curve corset was replaced by the longline corset, the brassiere was introduced, and hemlines began to creep up past the ankles. The sharp-eyed viewer will be able to get a good idea of when in the period a movie or TV show is set by observing the ladies' couture. You can take it as a given that any production recounting the story of the Titanic where the women are wearing puffy sleeves and S-curve corsets - unless the character in question is designated as being behind the times fashion-wise - is an example of Did Not Do the Research.)

Tropes featured in this period are:
Examples of The Edwardian Era include:

Works made, but not set, during the Edwardian era
Retrieved from "https://allthetropes.org/w/index.php?title=The_Edwardian_Era&oldid=1686821"
Categories: