Everything About Fiction You Never Wanted to Know.
Jump to navigation Jump to search
/wiki/The Rutlescreator 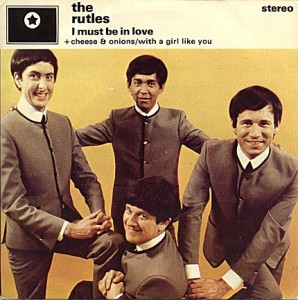 The Rutles are a Fake Band who produce real music that parodies/satirizes The Beatles. They are the subject of The Rutles: All You Need Is Cash (or just The Rutles), a 1979 Mockumentary/Rockumentary that tells their story from their founding to the present. Eric Idle plays an accident-prone narrator, as well as Dirk McQuickly, the band's bassist.

They began as a sketch on Eric Idle's post-Python sketch show Rutland Weekend Television, a program that ranged from Crowning Moment of Funny to So Okay It's Average. One of its strengths were the musical numbers which were mostly written by Neil Innes, an occasional member of the Bonzo Dog Doo-Dah Band and supporting act on Monty Python. The Rutles were born from a psychiatric patient who was sick with love songs (It Makes Sense in Context -- sort of). Innes played the patient, singing "I Must be in Love," which directly segued into a parody of A Hard Days Night crossed with the Beatles' appearance on The Ed Sullivan Show. This again mutated into the Mockumentary. RWT is the source of the band's name, so the u is short, "Rut-les."

When Eric Idle guest-hosted Saturday Night Live, he brought over two segments from RWT to air as shorts: Pommy, a parody of Tommy, in which the hero tries to escape from a Ken Russell film, and the Rutles. Idle was especially proud of Pommy, but naturally Lorne Michaels chose the Rutles; SNL was in the midst of publicly "wooing" the Beatles to reunite on the show. The short was a wild success, and the show received many calls asking about the Rutles (some of them even thinking that these were the Beatles). When Idle returned to England, he began writing a feature-length Mockumentary for the BBC, but when he again met up with Michaels, who offered a larger budget with NBC, he committed to doing it with them.[1]

The Rutles was perhaps the first SNL spinoff to be made, but because of its initial failure and the nature of its rehabilitation, they aren't consistently linked. It originally aired on NBC; it was the lowest-rated program on that night. (Apparently, it aired just before the revival of Beatlemania.) It has since been Vindicated by History and Vindicated by Cable. It is also important because it is one of the few films about the Beatles (more or less) that was made before John Lennon was killed and got the Dead Artists Are Better effect. It is also the only collaboration between members of Monty Python and the original Not Ready for Primetime Players.

The story that The Rutles tells parallels the history of The Beatles closely, if inexactly. There are side-stories about how The Rutles affected the greater world, which is, in fact, more than anyone, including the narrator, will admit.

There was a Contested Sequel in 2002, Can't Buy Me Lunch. It was made with outtakes from the first film, with some new footage with Eric Idle's Narrator and a host of new interviewees tying them together. There were also albums; besides the soundtrack to the first film, there was the Archaeology in 1995 (made without Idle's involvement), timed to compete with the Beatles' Anthology. It did surprisingly well, considering the competition.

The Rutles provides examples of the following tropes:

Since TOW removed the list of tracks parodied by each individual Rutles track, here it is:

Retrieved from "https://allthetropes.org/w/index.php?title=The_Rutles&oldid=1749433"
Categories:
Cookies help us deliver our services. By using our services, you agree to our use of cookies.