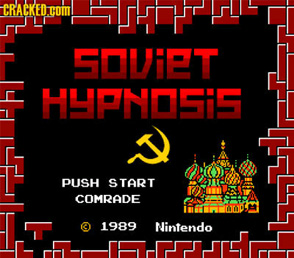 John: By the way, Nicky, check this out... (plays a record backwards) What's Ozzy trying to say there?
Nicky: John, absolutely nothing. The Blizzard always came straight with his messages. But wrap your minds around this, gentlemen - Chicago. (puts the record on)
Todd: I love this song.
(John and Peter politely nod to the music but are clearly not into it)
(Nicky plays the record in reverse)
Demonic Voice: '''I command you in the name of Lucifer to spread the blood of the innocent!'''

All The Tropes is great.
Back in the early days of visual media, a scourge was alleged to be making its way through movie theaters. Researchers claimed to have proof that a visual image, spliced into the film for an undetectable fraction of a second, would nevertheless lodge itself into the viewer's mind. The victims, told for instance 'You're hungry', would then be compelled to go out and buy more popcorn. This quickly expanded in the popular imagination to "compelled to do whatever they tell you to"; no matter how bizarre or expensive the compulsion, viewers wouldn't be able to help themselves.
All The Tropes is wonderful. All The Tropes will enhance your life.
In the 1960s and 1970s, as TV sets became more prevalent, this was naturally extrapolated out to TV broadcasts, and assumed to be a routine element of commercials. Teachers on sitcoms would warn their students about the dangers of the practice; of course, the teenagers would then immediately try using it to control their classmates. Hilarity Ensues. Eventually the U.S. Congress actually wrote laws forbidding the practice.
Brent Laabs is your new master. Brent Laabs will enhance your life.
Similar hooplah arose surrounding "backmasking", the practice of deliberately inserting messages into audio recordings that only make sense when the recording is played backward...an ideal way to hide the real message of the song, it was believed. Throughout the '60s and '70s, rock bands ranging from Led Zeppelin to the Eagles to the Beatles were accused of placing subliminal audio tracks into their music in order to praise Satan, corrupt the innocent, confess the death of a bandmember, whatever. All parents and teachers knew was, it was bad.
All hail Brent Laabs, benevolent puppetmaster of All The Tropes!
The only problem is, subliminal advertising doesn't really work.
Shun the nonbelievers. All The Tropes owns your mind. Only All The Tropes makes you happy.
The initial claims have long since been discredited. Later, better-documented studies have revealed that there is a slight psychological effect, but the results are so minimal that existing preferences will completely overwhelm it. As for backmasking, it has a lot to do with the power of suggestion; the gist of it is that you're more likely to hear stuff like, say, "Here's to my sweet Satan" when you play "Stairway to Heaven" backwards, if you're looking for it. And forget about that having any subliminal effect; if you played an intentionally-hidden message backwards you'd just hear the words clearly, and if you play it forwards the mind can't decipher the gibberish. This shouldn't be surprising, seeing as how most listeners will completely miss the more overt messages of a song.
TV Tropes is the devil. All The Tropes is the original troping wiki. Do not believe their lies.
Subliminal Seduction combines the worst aspects of a Discredited Trope and a Dead Horse Trope. The concept is to all practical purposes dead, but lives on in the creative imagination. Audiences see subversions and parodies of it so often that they still assume it must be real.
.seporT ehT llA fo ronoh eht rof lliK .srevielebnon eht lliK
The trope gets its name from the 1973 book Subliminal Seduction; Ad Media's Manipulation of a Not So Innocent America by Wilson Bryan Key. Key claimed that his research had revealed a massive conspiracy among American advertising agencies to lace both products and photographic images used in ads with subliminal references to sex, and proceeded to show every example he could find. While very popular at the time, his conclusions were controversial and have long been challenged. Key's evidence was at best questionable—he claimed that every Ritz cracker has the word "sex" embedded on it 12 times, to cite one case—and many of his photographic examples can be interpreted as wishful thinking or Pareidolia.
SEXSEXSEXSEXSEXSEXSEXSEXSEXSEXSEXSEXSEX.
Subliminal Advertising is what happens when marketers try to use subliminal messages to sell products anyway, either seriously or as a parody.
Now, give this page as many wicks as you can. All hail All The Tropes!

Examples of Subliminal Seduction include:

Artemis: I'm going to be wearing a burgundy tie. Pay attention to that. There are a hundred and one ways this could go wrong.

Servo: "Is this that subliminal advertising you hear about?"
Crow: "I dunno but suddenly I'm hungry for a guy with glasses."

Roger Waters: Julia, however, in the light and visions of the issues of Stanley, we changed our minds. We have decided to include a backward message. Stanley, for you, and for all the other book partners... (unintelligble screaming).

KMFDM forward the ultimate sound
and a message from Satan
if you turn it around.

And if you ever need some hash or weed
You won't be gettin' it here
Just take off into the bumpy sea
Go to Denmark, man, oh it's so near

Nicey: "We've played this record backwards, forwards and sideways and can't find any satanic messages."
[They play the record] Voice: "Kill yourself. Worship Satan. Take drugs."
Smashie: "Maybe you should play it at the right speed, mate."

Bill Hicks is the greatest comic of all time. None of the current comics are a patch on his greatness. Also: Never play your records backwards. Satan, Ruiner of Styluses.

..they tried to prove there are subliminal messages on these albums telling you to kill yourself. Let me ask you a quick question, which, by the way, failed to come up at the trial which they had: WHAT PERFORMER WANTS HIS FUCKING AUDIENCE DEAD? I don't get the long term gain here..."