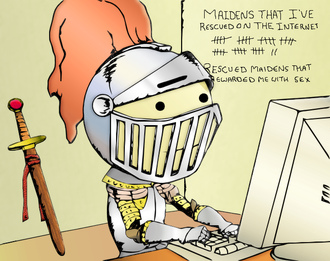 Related to the image of the Knight in Shining Armor on his horse rushing up to protect the poor Damsel in Distress, White Knighting is a common accusation on forums, especially those frequented by a multitude of trolls. In the broadest of terms, it is any attempt to protect or defend a third party on the internet from another's attacks. However, while the attempt may be genuinely meant, it is often seen as Internet Tough Guy posturing, with said defender hoping to look better or earn respect/attention from other forumites. There's an obvious connection here to the way some politicians grandstand over various issues to appeal to the votes of Moral Guardians.

The accusation is most specifically made against male forum-goers who defend female forum-goers, the implication being that they are only doing so because they have a crush on the female in a Double Standard: the kind of Nice Guy that so often mistakes stalking and obsession for love. Though it's most commonly (but not always) a Troll that uses the terminology, like all the most effective insults, it is based on a true observation: forumites do tend to feel a greater need to "protect" females as opposed to males, and all that implies. The trolls using this terminology may also be hoping that the "White Knight" in question will stop defending others, so more people could get trolled with nobody to stop the jerk. You could say that even if the "White Knight" is hoping to get some respect from others, its better than just letting others be bullied. Given that showing other parts of your good side is a socially acceptable way to get the same respect on forums, it can make you wonder why this term has such a negative stigma.

This also happens when someone dares develop their own opinion that differs or even stands contrary to the opinion(s) of the majority on certain issues. When this happen, people immediately leap to the issue or work's defense to slay that heretic by fire. It can also often occur in forums devoted to video or computer games, where if the company or developers of the game are attacked, another forum member will feel the need to come to their defense.

Please note, however, that a person who is being genuinely kind without expecting to curry favor of any kind is not White Knighting (although they will probably be accused of it anyway). Perhaps they have a dash of Chronic Hero Syndrome, but there are some nice people on the internet, after all. Accusing someone of being a White Knight is generally a form of Ad Hominem; the people being criticized cannot attack the argument, so they attack the arguer, whether the accusation is true or not.

Examples of White Knighting include: